Masterchef In Hot Water Over Eels 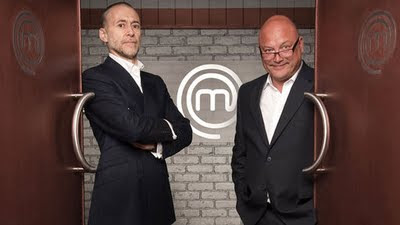 Masterchef: The Professionals has found itself in hot water for putting eel on the menu.

Conservationists saw red because the European eel (Anguilla anguilla) is critically endangered, and the BBC programme’s so-called ‘Delia effect’ could have promoted demand for eel among viewers.

In the recent show, presided over by Egg Wallace and Skeletor, sorry Michel Roux Jnr, four hopefuls were told to prepare two dishes using smoked eel in 50 minutes (about as long as the last eel in the wild has left by the sound of it...)

And this is where the trouble started. The European eel is in freefall decline, with numbers of elvers plummeting by an estimated 99% since the 1980s, warn experts.

Despite eel, smoked or otherwise, being on the menus of many top UK restaurants, the fish is on the "red list" of the International Union for the Conservation of Nature, meaning it is only a small step away from extinction.

"Serving up European eel on a popular television show like Masterchef is irresponsible – and likely to lead to even more demand for a species that is just as endangered as tigers or pandas,” said a spokesman for Greenpeace's Oceans Campaign.

"Eels are intrinsically linked with London, as a traditional dish, yet it is our overfishing of this species which has pushed it towards the brink of extinction.”

The sight of Egg and Skeletor stuffing their faces with the forbidden fish provoked a storm of protest. It made no difference that the eels in question were farmed – by priests no less, says Chris Daphne, the environment officer of the National Anguilla Club.

“Eels are not bred in captivity; aquaculture relies on the collection of seed eels (elvers) which are then grown on,” he says. “This means that the species is unsustainable as ALL eel sold in restaurants, shops and bait suppliers have been taken from the wild initially.”

Experts say it is time for eels to come off all menus, pointing out that the UK exports 250 tonnes of eel every year, and it takes 3,500 individual eels to make a kilo of meat.

Indeed, so serious is the problem, the EU has asked all 27 member states to restrict eel fishing to give stocks a chance of recovery. The Dutch government has even announced a ban on commercial eel fishing.

And last year, Gordon Ramsay, was slammed for cooking eels from the River Severn - even though they had been caught under licence.

But clearly all of this had escaped the BBC's researchers.

A BBC spokesman whined: "We absolutely recognise the very important issue of sourcing sustainable ingredients and, in all our Masterchef programmes, we take a lot of time and make every effort to use locally sourced ingredients.

"The eel in question was used in a classic recipe test, and came from a farm in Northern Ireland run by priests who assured us it had come from a sustainable source. For future series, contestants will be required to consider the endangered fish list when submitting menus."

Those pesky priests, hey, and isn’t it a bit rich putting the onus on the contestants’ environmental awareness when they’d been told to cook the smoked eel in the first place?
at 1:18 pm

Email ThisBlogThis!Share to TwitterShare to FacebookShare to Pinterest
This blog was brought to you by the words... Eel, endangered fish, Gordon Ramsay, Gregg Wallace, Masterchef: The Professionals, Michel Roux Jnr, smoked eel

I doubted the figure too. But sadly it's true, according to conservationists.

Most are killed by parasites, overfishing etc. So on average, given the poor survival rates to maturity, it takes 3,500 elvers to guarantee a kilo of adult meat.

It may be right, have you seen the sheer quantity of frozen elvers stacked up in spanish supermarkets.

Elvers were a delicacy, hard to come by because they had to be eaten so fresh.

But as ever, the eu turns a blind eye to spanish fishing practices.

Glad to see this topic raised! I even cringe even when they cook stuff like pigeons and lamb :( (vegetarian thing!)