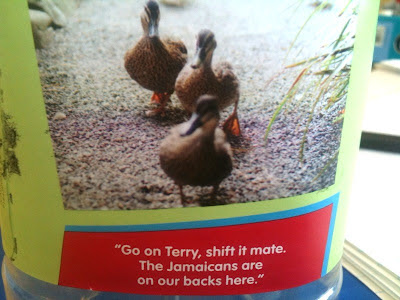 They say timing is everything in business, so Innocent Drinks may be regretting a rather bizarre caption on one of its juice bottles.

The company, which is now majority owned by Coca-Cola, admitted the wording on its advert hailing itself as the official juice of the London Olympics was “pretty unfortunate” - but says it has nothing to do with the John Terry racism case splashed across the front pages this week.

On thousands of bottles of its drinks, under the headline “the juice of champions”, there is a picture of three ducks with the caption “Go on Terry, shift it mate. The Jamaicans are on our backs here...”

Observers were left scratching their heads about what it meant, with speculation it may have been a reference to the former England captain, who yesterday was cleared of a racially aggravated public order offence against QPR’s Anton Ferdinand, whose father is from the West Indies.

But apparently the chatty branding was just an ill-timed coincidence, according to a spokesman for the drinks firm.

“It’s pretty unfortunate, but we’ve actually had this caption on our juice bottles since before that whole saga,” he said.

Seeing as Terry was first accused of the racist volley of abuse nine months ago, Innocent were clearly well ahead in their Olympic marketing plans.

Last year, Britain’s biggest smoothie maker was hit by revelations that it held on to £520,000 pledged to its charitable foundation in 2007, and had not donated a penny since 2008 - despite printing on bottles that 10% of its profits went to charity. 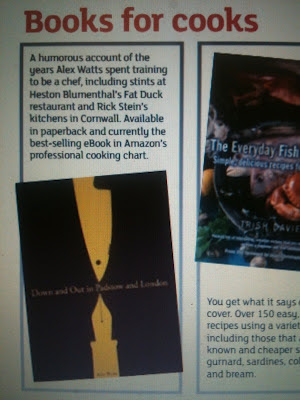 :: Little bit on my new food book 'Down And Out In Padstow And London' in the latest issue of Essential Catering magazine.

Email ThisBlogThis!Share to TwitterShare to FacebookShare to Pinterest
This blog was brought to you by the words... Alex Watts, Anton Ferdinand, Chelsea, Coca-Cola, Down And Out In Padstow And London, Innocent Drinks, John Terry, London 2012, Olympics, QPR, racism trial, smoothies
Newer Posts Older Posts Home
Subscribe to: Posts (Atom)