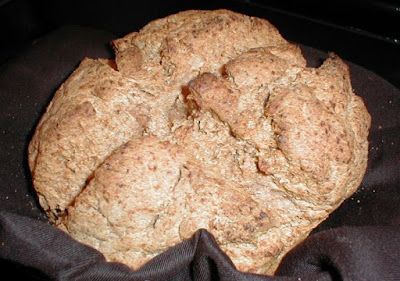 I went in for an extra college day and joined a chef who needed to tick off his bread "units" for our Level 2 Diploma in Hospitality. I haven't done much bread, and thought I could do with the extra practice.

We made two types, but unfortunately I haven't got any photos from the day because I didn't have a camera with me, and he dropped his phone in the soup which meant the pictures he was supposed to email me never arrived. Shame, because they turned out well. But I'll be making them again when we get to do our bread units for the course, so I'll post the pictures then.

The first was Irish soda bread, which is great for people who can't eat yeast because being a so-called 'quick bread' it doesn't use any. Instead the leavening agent is sodium bicarbonate (aka bicarbonate of soda or baking soda). This reacts with the acid in the buttermilk to produce bubbles of carbon dioxide as yeast does.

Buttermilk costs a fair bit in the shops now, for some reason, despite the low price of milk. But there is a much cheaper way of making it - and for this we used an old Cornish recipe the tutor had been taught by his grandmother. For every cup (250ml) of milk, add one tablespoon of freshly-squeezed lemon juice. Leave it for 15 minutes, stirring from time to time, and it will thicken slightly, giving a runny yoghurt consistency.

We also made our own self-raising wholemeal flour because we'd run out - to make this add 2 teaspoons of baking powder to every 150g of plain flour.

Put the flours, salt and bicarbonate of soda into a large mixing bowl and mix together. Make a well in the centre and pour in the buttermilk. Mix quickly to form a soft dough. The dough should be a little stiff - and not wet and sticky. Rectify this by either adding a drop more buttermilk to ease it up, or if it is too wet, a little more flour.

You shouldn't handle soda dough more than necessary - just bring it together, shape, cut and cook. As artisan baker Bill King points out, "kneading kills sodas". (By the way, I recommend reading Bill's blog about his time on the Ballymaloe cooking course. Very useful stuff.)

Break the dough into two equal round balls. Flatten each one and using a knife cross the top of each. Put them on a lightly-greased baking tray and bake in a pre-heated oven at 200C for 35 minutes. You can test whether they're done by knocking on the bottom - they should sound hollow.

The second bread we made was a roulade-style loaf flavoured with chopped fresh tarragon and roasted red peppers. For the latter, we roasted the peppers in a hot oven for 20 minutes. Then removed them and put them in a plastic bag for 20 minutes to make them easier to peel. Once peeled, we finely diced them.

The base was the enriched bread dough recipe below. Once we had rested the bread for 30 minutes so that it had doubled in size, we split it into two, and moulded each on a lightly-floured board into a rectangular shape, about 30cm long and 20cm wide.

We then scattered chopped tarragon and diced red peppers over them, and rolled them up into a roulade sausage shape. We brushed them with egg wash (whole egg rather than egg yolk), then put them on baking trays and let them rise for another 30 minutes before baking at 200C for 15 minutes.

Mix the dry ingredients together in a large bowl, rubbing in the butter between your palms to form fine breadcrumbs. Then in a separate vessel stir the water, yeast and sugar together. This separation is critical because if you just chucked them all in together, the salt would kill the yeast.

Once the yeast is dissolved, let it stand for a couple of minutes. Then pour the wet ingredients into the dry ingredients to form a dough. Knead for 10 minutes on a lightly-floured board until smooth - the best way to do this is using the base of your palms (but not for kneading pastry as this is the warmest part of the hand). Form into a ball, and put back in the mixing bowl. Cover the top with clingfilm and leave for 30 minutes.

At this stage, we made the roulade loaves. Alternatively, to make bread rolls instead, measure the dough into 85g pieces and mould into flattened balls. Place them on a lightly-greased baking tray, brush them gently with egg wash and leave them to prove for 30 minutes.

Again, some people use biscuits as a thickening rather than flour. But we used the latter. The lesson came with a short aside about using roux (equal amounts of flour and fat) to thicken sauces. For a ‘white roux’ - for use in white sauces - you fry the flour and fat over a low heat for five minutes, for a ‘blonde roux’ – the base for veloute (velvety) sauces – you cook the flour out for 10 minutes, and for a ‘brown roux’ – for gravies etc. – you could it for 20 minutes.

In a large saucepan, heat the oil and sweat the onions, potatoes, celery, carrots, bacon, garlic and peppers over a low heat for 10 minutes, stirring regularly. Once soft, but not coloured, add the flour and cook out for five minutes, stirring all the time.

Heat the stock and add a ladleful at a time to the roux, making sure the liquid is fully dissolved until adding the next batch. Simmer for 10 minutes. Season to taste. This can then be cooled and left covered in the fridge for a couple of days until you are ready to use it.

Wash the clams well and discard any that are open or broken. For my money, the best in the UK are the small carpet clams you get in Portland, Dorset – called palourde in France and almeja in Spain. Put them in a covered pan over a medium heat and cook until they are open – this should take only a minute or two.

Add the cream to the chowder base and the poached clams and serve with plenty of crusty bread. Garnish with finely chopped chives and black pepper. Some people also whisk in 125g of butter to give a good glaze to the bowl, but then some people eat butter the thickness of bread.
at 3:07 pm No comments: 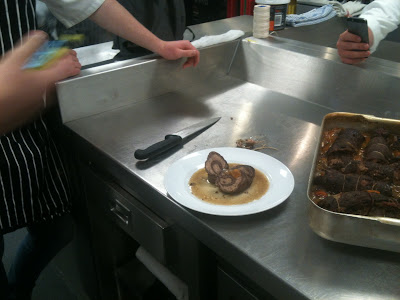 They say you never stop learning about food, which is why I've just started a Level 2 NVQ Diploma in Hospitality at the tender age of 84.That and also because I need the paperwork. My plan is to get a job on the yachts cooking for people with too much money, and for that you need food qualifications, I'm told, not just kitchen experience.

Anyway, I've just finished the second week on the course, and I'm loving every second. Well, not every second, but it's going much better than I dared hope. My plan is to blog the recipes and techniques I'm learning each week, so I'll start with beef olives - a meal we knocked up for the training restaurant. 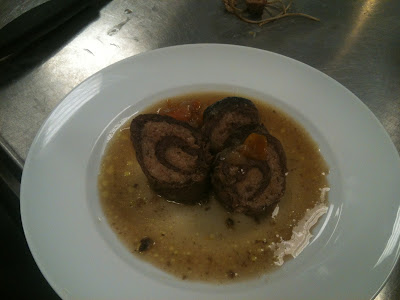 I'm not sure about the history of the dish, but according to the 18th century cookery writer Hannah Glasse there are references to "beef olives" in Scottish cooking as far back as the 16th century. This doesn't mean it's a Scottish dish. It shares just as much with the rouladen dishes that grace German cookery, as well as the zrazy dishes of Eastern Europe.

Of course, it'll be much older than any literary reference. I imagine cave men were rolling up slices of silverside mammoth and slowly cooking them with vegetables in hollowed out rocks way before anyone knew what an olive was. A far cry from the Rational combi ovens we're lucky enough to use in the training kitchen, but the principle is the same. Batter cheaper cuts of meat to make them tender, roll them up, and then cook for a long time until soft and full of flavour. 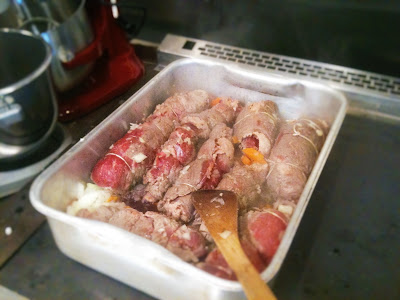 We were making a huge batch, using two large joints of topside of beef weighing around 3kg each. But just reduce the quantities accordingly if you're not cooking for a crowd.

It's much easier to slice the beef if it is still slightly frozen, or well chilled, as it will hold together better. Using a very sharp cook's knife, cut the beef into finger-wide slices. Take each piece and put between clingfilm and batter with a rolling pin until about a third of the width. 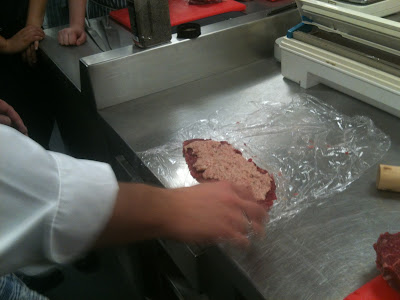 Take off the clingfilm, and season the beef with salt and pepper. Spread the meat with sausagemeat, a few milimetres thick. Then roll up into a tight sausage shape. Cover with clingfilm then roll on your board, holding each end of the clingfilm, until it is a compact cylinder shape. Repeat with each slice and chill in the fridge for an hour so they firm up.

Meanwhile, finely dice the onion into brunoise. Peel the celery and carrots, quarter them lengthways and cut into paysanne - a sort of curved, triangular shape. Put three large roasting trays on the heat and pour 2tbps of oil into each one. Add the onions, garlic, carrot and celery and begin to brown. Stir regularly until they have some colour. 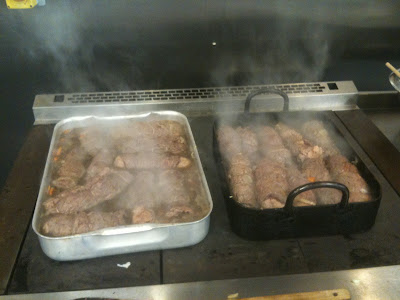 Unwrap the beef olives and tie each with butcher's string using three slipknots. Add the olives to the pan and turn over from time to time until they are evenly browned, then pour two cups of  red wine into each tray. 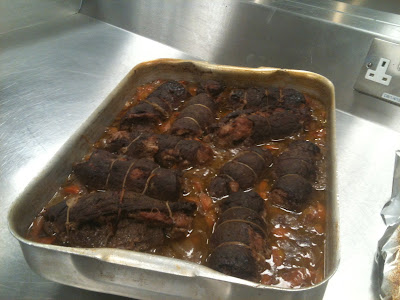 Cook off the wine for a few minutes, then add two litres of beef stock into each tray. Bring to a simmer, cover each tray with foil and put in a pre-heated oven at 180C for two hours.
Serve with mashed potato and seasonal veg.