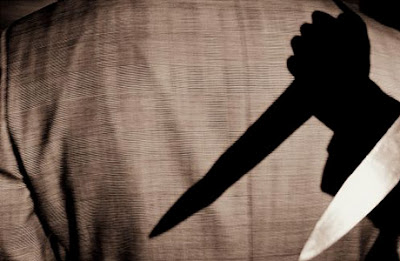 We were half-way through lunch service when Liz, the restaurant manager, came waddling into the kitchen like an asthmatic hippo. The only time I'd seen her move quickly, was to grab someone's chips. Something was very definitely up.

“The AA inspector’s in there!” she gasped.

“How do you know?” Jules snapped. His face had turned a pale, porridgey colour.

“I recognise him from last time...he comes in sometimes with his wife and kids...but he’s on his own this time!”

Liz stole a chip from a plate. “No idea.”

She disappeared and returned with the rest of the Dereks a few minutes later.

“The boudin blanc and the lamb,” they chimed. They were all enjoying the drama immensely.

Jules looked round the kitchen in panic, and shouted at us to clean up. "I want to see bubbles everywhere!" he screamed.

Inspectors sometimes ask for a tour of the kitchen, and he was taking no chances. He ranted and raved for a bit then yelled at me to make sure the veg was perfect.

All I had to do for the first course was pan-fry some spinach in clarified butter and season it. Jules fried the boudin blanc sausage and let it cook through at the bottom of the grill. He rested it under the lights on the pass then cut it into five slices on the diagonal.

He put the slices in a circle around a small mound of spinach. He tried the spinach as he did it, and looked slightly surprised. “That’s fine,” he said. He grabbed my pan and pushed me out of the way. He wasn’t taking any chances.

He formed the warmed, red onion marmalade into a quenelle using two spoons, balanced it on the spinach, then spooned grain-mustard veloute sauce around the plate with tear-shaped twirls. It was finished off with a sprig of chervil, like most of our dishes.

The dish went out and we got to work on the lamb. I can’t remember if there were other orders at the time, but for 30 minutes there seemed to be only one customer in the restaurant. So much for everything Jules had said about "customers being more important than awards". A few minutes later, Liz returned with an empty plate and said he’d enjoyed it.

I picked out three identical broccoli florets, and cut three carrot batons to exact length. I even thought about using a ruler to measure them. I put a fresh pan of cassoulet beans on the flat-top, and heated them through. I was worried about the beans. They didn’t have the same zip as the first batch, and I’d secretly pepped them up with ketchup and Worcester sauce. I just hoped the inspector wouldn’t notice.

Jules roasted the lamb and let it rest under the lights. I was about to plate up, when he pushed me out of the way again and snarled: “I’ll do this!”

He nestled a mound of beans in the middle of the bowl and put a triangle of carrot batons around them. Where each baton joined, he placed a broccoli floret, and then put the lamb in the middle and poured jus over it.

After the meal, the inspector flashed an ID card, and summoned Jules into the dining room. He was gone about 15 minutes. None of us knew if that was a good or bad sign.

Eventually, Jules came back in with his head down. None of us looked up. Then he walked over to my station and glowered. He looked ready to bite, and I scanned my station for knives and hot pans. Then he lunged forward and hugged me.

“That wasn’t at all stressful,” he whispered.

“No, I was shitting myself!”

It was the first time he'd let his guard down, and for a minute he looked like a pudgy schoolboy. His eyes were red and watery.

“That was my first inspection," he said. "Well the first one as a head chef!”

We had kept our only AA Rosette. The inspector said the standard was one Rosie, bordering on two. He had asked about the boudin blanc, and Jules had to admit it was bought in. He said all the veg was perfectly cooked, but the lamb “could have been a little pinker”. I did a whooping motion in my head. The veg was perfect, Jules' lamb wasn’t.

Jules was surprised, because if anything, we served meat on the raw side, and sometimes got the lamb sent back by squeamish customers. He said my cassoulet “was nice and spicy, but the beans themselves lacked something." What the hell were you supposed to do? Grow them yourself? At least he hadn’t noticed the ketchup.

The inspector loved the chocolate marquise dessert and declared it two Rosette standard. Helsta poked her nose in the air, as brazen as a dog at a fair. Jules kissed her and gave her the evening off.

I spent the rest of the day on a high. Although my role had only been minor, I was still part of the team that had successfully defended that precious Rosie. And my veg was perfect. More than that, we were verging on two. Who said awards didn't matter?
at 8:01 am

I love how this blog shows the real highs and lows of cooking. You go from some weeks where you seemed totally fed up with it to amazing highs like this one!

You write really well, too and I really felt the tension as Jules was out getting grilled and could imagine exactly how he looked when he came back in.

Reading your blogs opened my eyes as to what happens in the kitchen.

All the chefs I've met and know are already there, they never talk about the days when they first started out.

Super. Took me right back to my days in what is now known as hospitality.

In over 40 years I see things haven't changed one bit!