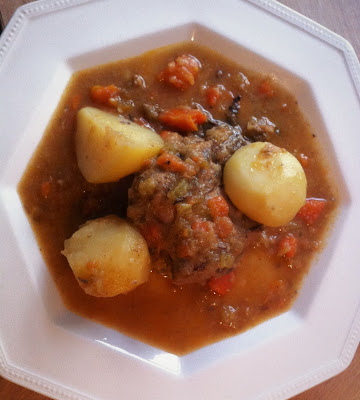 There's an old joke along the lines of a man goes into a restaurant and asks, "Is the rabbit wild?" "Of course it's wild," says the waiter, "it's absolutely livid."  That's got nothing to do with anything, but just to say use wild rabbit for this recipe. It's got a far better flavour than farmed rabbit, it keeps poachers in work, and most farmed rabbits live terrible lives.

I had wild rabbit on a recent trip to Georgia (the country not the state) and I'd almost forgotten how good it is. There it was cooked in white wine and served in a clay dish surrounded by mashed potato. It tasted good, but the meat was still very firm and could have done with being cooked at least an hour longer.

It can be quite a fiddly meat so you want it falling off the bone - and that takes two hours or so of slow cooking. This recipe will do the trick. It is good cooked in red or white wine, but I find it's much better when braised in a (forgive me) hoppy beer like Indian pale ale.

Rabbit is generally cut into eight pieces and it is very easy to do. Take the legs off, and cut the body into four pieces. Make sure you put in the kidneys etc. as well, as they improve the flavour of the liquor. The secret is not to hack away at it with a knife, otherwise you'll end up with sharp bone shards in the stew. Instead hit the back of your knife with a rolling pin and this will give a clean cut through the joints. Easier still, get the butcher to do it.

Sprinkle the pieces with salt then dredge in flour so they are evenly coated. Heat the oil in a pot until it is quite hot, then add the rabbit. Cook on each side for three minutes or so until well browned. Add the onion, celery and carrot and stir well. Fry for another two minutes, then add the bay leaves, tomato puree, cardamom, garlic and peppercorns.

Add the beer, making sure you scrape off all the fried flour bits that may have stuck to the bottom of the pan. Then add enough water to just cover the rabbit. Bring to the boil, then reduce to a low heat. Cover the pan and simmer on the stove for two hours. Stir occasionally and cook at times with the lid off if the liquid needs reducing. Add more water if it is getting too dry. Add the potatoes 30 minutes before the end. It's ready when the meat can be pulled off the bone and the potatoes are still holding their shape, but cooked through. Season to taste.
at 3:16 pm No comments: