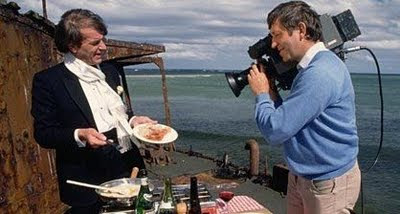 I heard some very sad news this morning. My cooking hero Keith Floyd - the man who inspired me to try to make it as a chef - has cancer.

The 65-year-old TV cook was diagnosed six weeks ago, and has since had five serious operations and is about to undergo a gruelling period of chemotherapy.

But he is staying positive, and has vowed to fight the disease. In true Floyd spirit, he even said he was going to cut down on the fags.

"I went to Spain six weeks ago to see my old doctor about a little growth; he said: 'Not very good news I'm afraid, you've got bowel cancer' - it's not what you want to hear," he said.

"Since then I've had endless operations. Five knife ops in total and they were 90% successful at cutting it out.

“Now I have five weeks of chemotherapy coming up. I'll have to make daily visits to Nimes Hospital. I'm not thrilled about it, no, but what can I do? I'll get through it."

He is being looked after at his home in the south of France by close friend Celia Martin, widow of Doctor Who screenwriter David Martin.

Floyd added: "My housemate Celia Martin has been wonderful. She and I go a long way back.

“Her husband was my best friend and he died two years ago. It is a purely platonic friendship; we are good company for each other."

Floyd - famous for glugging red wine on his shows, and a flamboyant way of throwing things together that made it okay for men to like cooking – spent time in hospital last year after he collapsed at a friend's pub in Stoke.

The papers said he’d embarked on a week-long binge to get over the split from his fourth wife Tess.

But his spokesman Stan Green denied it. “He’s far stronger than that,” he told me, “Keith’s not the sort that would mope over a woman.”

It was the stress and long hours of setting up a restaurant inside a swanky hotel on Patong Beach in Thailand – something he had promised himself he would never do again.

The last I heard was that the venture had crashed, and he was back in France, impoverished and worrying about whether he would even keep his beloved fishing rods.

His old producer David Pritchard – the man who turned him into the nation’s first proper celebrity chef – had flown out to Phuket a week before to meet his old drinking partner.

Floyd was drinking large vodkas and much of the bitterness between the two men was still there. “I don’t know whether to hug you or punch you,” said the cook.

Asked about the celebrity chef phenomena that Floyd’s stardom had spawned, he told Pritchard: “I’d like to napalm the lot of them!”

The two men talked about doing a final series together. I do hope he gets better soon.
at 12:39 pm 10 comments:

Email ThisBlogThis!Share to TwitterShare to FacebookShare to Pinterest
This blog was brought to you by the words... celebrity chef, David Pritchard, Keith Floyd, Rick Stein 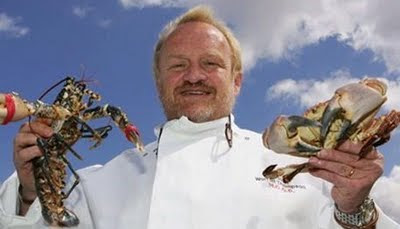 True, I’ve always found him a pretty decent bloke, happy to share a fag out the back with lowly chefs, rather than ponce about with PRs, plus-fours and fake plummy accents like Marco Pierre White for instance.

But I’ve always considered him as someone who’s gone a long way on very little talent.

And he did little to ingratiate himself when he shut down part of his business empire only to open again months later still owing angry creditors thousands.

So imagine my surprise when I found myself whole-heartedly agreeing with his spiteful comments about fellow TV chefs Gordon Ramsay and Heston Blumenthal being overrated.

Now we know about his long-standing spat with Ramsay – who described him as a “squashed Bee Gee”, and my favourite, “Ready Steady Twat”.

And I don’t want to waste any further words on the former World Cup-winning footballer, who I think gets more than his fair share of attention already.

But I can see what Wozza means when he calls him a “one-trick pony” without "any depth".

I’m far more interested in his words about Blumenthal, who usually manages to duck out of celebrity chef spats by being nice about everyone in his tediously bland way.

"Heston loves his food, don't get me wrong,” says AWT (and you know there’s a but coming...there’s always a but...)

“But some of those egg-and-bacon ice creams, beetroot jellies where it's coloured orange...it's a gimmick. It's theatrics.

"Everyone will look back in ten years' time and be horrified – even Heston to some extent."

Sadly, I know it will take more than a German chef blowing his hands off to spell the end of molecular gastronomy and nitrogen cooking, or a rant by a squashed Bee Gee. But that’s exactly how I feel...as I’ve blogged about in the past...click here for more.

But one final note. Why can’t Heston - a kick-boxing, former debt collector apparently named after a motorway service station (yeah right) – emerge from Ramsay’s protective cape and put the boot in for once?

Childish, I know, but I can’t wait for someone to call him Willy Wanker.
at 1:26 pm 5 comments: