The Mystery Of Thailand's Pink Eggs 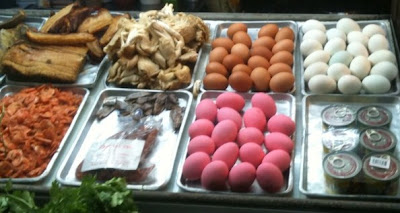 I have just arrived in Thailand for a SE Asia food tour, and after one night in Bangkok, headed out to the relative tranquillity of Kanchanaburi, a small town surrounded by temple caves hewn into the limestone hills, and home to the famous River Kwai Bridge.

What a place! The food night market (Th Saeng-hchuto), near the bus station, is quite something, and after a tour of the vendors – selling everything from catfish to chickens’ feet – I sat down at a stall selling pink eggs. I couldn’t resist them when I saw them, and as the stallholder like everyone else at the market spoke English as good as my Thai, I have no idea what the dish was other than a slant on the famous Chinese dish One-Thousand-Year-Old-Eggs (aka Son-In-Law Eggs - although it's probably called Daughter-In-Law Eggs in Thailand). 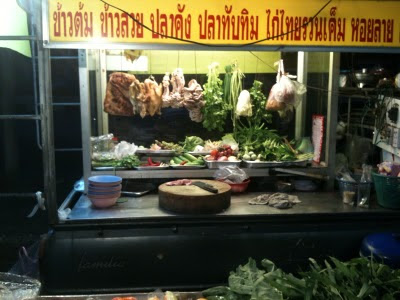 It was only when I got back to my hotel and spoke to a chef called Apple, who runs Apple & Noi’s Thai Cooking Course in Kanchanaburi, that it became clearer. The eggs apparently are preserved in a mixture of lime, clay, salt, and rice hulls for a few weeks – a method of curing eggs dating back hundreds of years. I’d seen them before, but the shells had always been white. I asked whether they put beetroot in to colour them, but she laughed.

“They’re laid like that. They come from special chickens in the south of Thailand,” she said.

I still don’t know if she was winding me up, or whether the farmers fed them prawns or something. And when I did a bit of research on the internet, I was no clearer. There is apparently a special breed of chickens in South America that lay pink eggs. But they’re not really pink when you look at the photos. All I know is the only pink eggs I’ve ever seen have been at Easter, so if anyone can shed some light on this, I’d love to hear.

I watched the stallholder make the dish from start to finish (not the egg curing, obviously, that would have taken far too long) and the whole thing really blew me away. Not just his kindness and patience seeing some bleary-eyed farang towering over him, watching every knife stroke (and any cook will tell you how irritating that is), but its simplicity and fiery magic. In fact, it was so full of face-slapping flavour that you could barely taste the raw onion in it. And that’s what I call a salad. 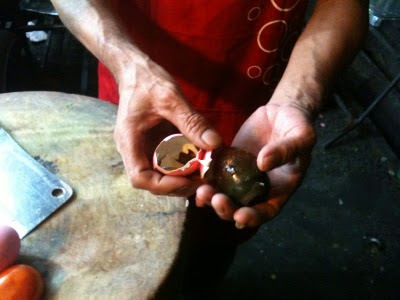 Then, for some reason, he pulled an elastic band tight and sliced the eggs into quarters with it. 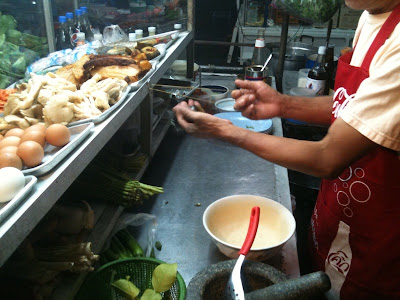 He arranged them on a plate – their yolks oozing out like rotten aubergine – and proudly held them up for me to smell. Was that a faint whiff of ammonia? Sulphur? Mustard gas? Or some other chemical weapon? 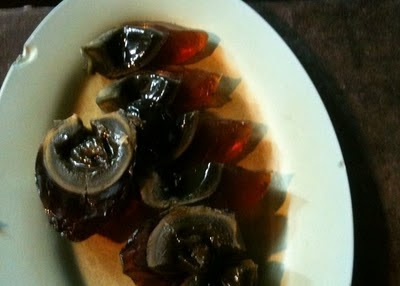 He grabbed a mixing bowl and threw in a handful of ginger cut into julienne strips. They were as skilfully sliced as anything I’d seen in a Michelin-starred kitchen, and there wasn’t a mandolin in sight. 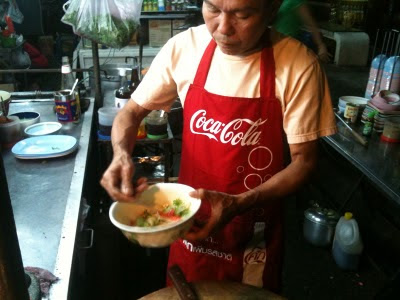 He asked how many red chillies I wanted, and I held up five fingers. He then pounded the chillies in a pestle. 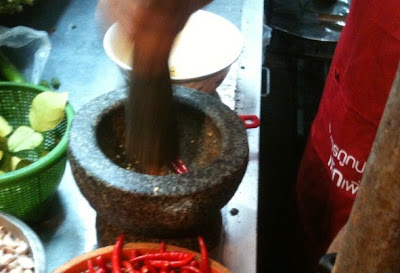 He added them to the ginger before seasoning with a little sugar, salt, fish sauce and lemon juice. Then he chopped up a sprig of coriander and finely sliced a quarter of an onion and mixed the whole lot together and arranged it over the eggs. 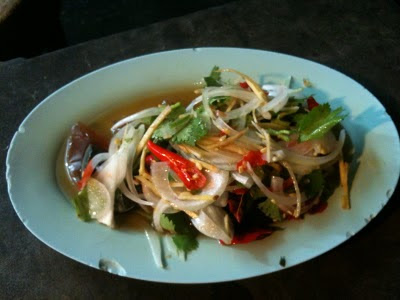 What a blast of primary colours! There was only one drink worthy of such a salad and that was a massive bottle of ice cold Chang beer. I sat down and tucked in as the Thais giggled away, pretending not to watch me. I admit the egg itself looked far from appetising, but I threw myself in and began wondering when I’d last had such an incredible meal. The white had a gelatinous quality, and the yolk was rich, creamy and soothingly salty. It was difficult to describe the taste, but I wanted more of it. If this wasn’t umami then I don’t know what was.

After another Chang, I headed round the market again and took more photos. Food trucks in the US and London? Blah! Nonsense! Go to Thailand. They were doing food trucks and motorbikes decades before they were trendy... 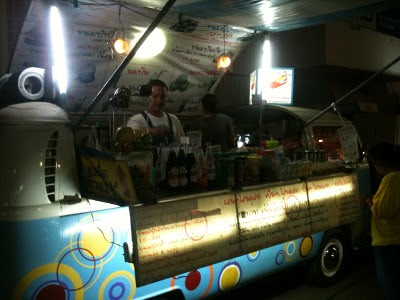 Throw another catfish on the barbie...some fish from the River Kwai: 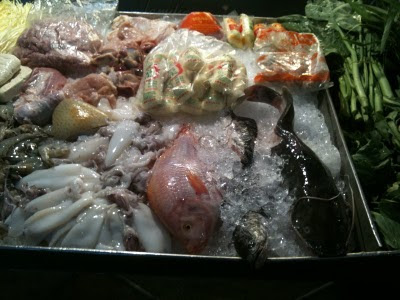 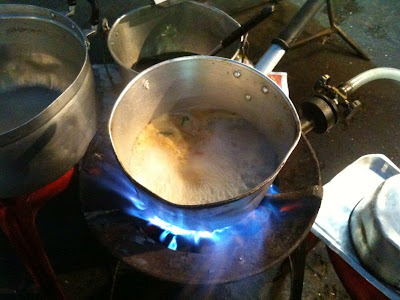 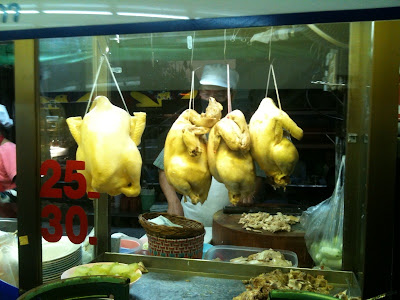 Massive pot of chicken with rice: 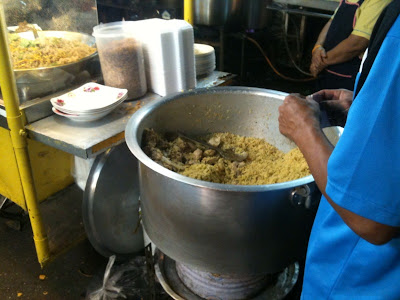 For afters...bags of flavoured syrups at a sweet stall: 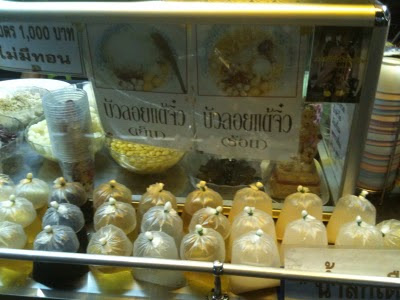 Email ThisBlogThis!Share to TwitterShare to FacebookShare to Pinterest
This blog was brought to you by the words... Chinese One-Thousand-Year-Old-Eggs, Kanchanaburi, night market, pink eggs, River Kwai Bridge, Th Saeng-hchuto, Thailand

With these pictures, Ambassador, you are making me very happy ;)

Working on the premise that brown hens lays brown eggs and white hens lay white eggs,Id really like to see those chickens.
Alternatively,maybe they're boiled in cochineal.

Glad you like the pics. Going to send some of Bangkok - your favourite eating city in the world. Mad place isn't it!

You may well be right. The pink egg mystery has ruffled a few feathers in the poultry world, it seems. Farmers on the River Cottage and Poultry World forums are divided, but most think the eggs have been dyed.

They are very bright....I did think they look dyed - but then I found this -

It does mention that some hens lay pink eggs.

Bit of a mystery. But they still look dyed to me.

Fab blog - and engagingly written, too

It is a totally mad place, nothing is done by halves. I tried to take a pic of the multi-coloured taxis but never got one to look quite right. Only in Bangkok would even the taxis be that mad :) Looking forward to more photos ... Have fun

That preparation of century eggs looks fantastic, the pickled ginger works wonders with them and the chillies sound great too.

I do like the fingers held up for chillies. Where else would 5 (or 7, think that was the most I was offered) birds eye chillies be deemed sensible for a one-person dish?

Forget your occidental prejudices and try, it taste very good in salad !!!

Traditionaly it is made with duck eggs.

They are dyed pink so that you can know what you see. I've been told there is two kind of century eggs, you must ask for eggs for "yum khai yaew ma" (salad of horse piss eggs..

Once in Ubon Ratchatani I had it with one cashew nut jabbed in each egg quarter -> delicious :-)

The best khai yeow ma and khai kem (another kind of preserved eggs) comes from Chaiya in Surat Thani province. Hence the lady in the market made a reference to southern Thailand.

I love scanning your blog and your dish was very impressive I hope that you will continue to inspire people and always be happy of what your doing. Have a great day. Visit my site too. Thank you.

They are painted hence why they are white on the inside