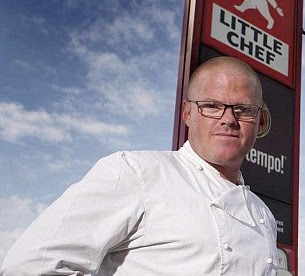 The first sign that Heston Blumenthal’s makeover of Little Chef had failed was in January last year when the roadside restaurant chain announced it was closing 61 of its 161 outlets and shedding 600 staff.

No doubt the sacrificed wage slaves were delighted to learn that the millionaire chef would remain on the payroll as a consultant despite the mass redundancies.

But now they’ll be even more pleased to learn that Blumenthal, 47, has been axed and all his dishes dropped from the ten eateries they were served in.

In a strongly-worded statement, Little Chef bosses said his dishes - such as braised ox cheek, and serving fish and chips with a small bottle containing essence of pickled onion so diners could replicate the “smell of the chippy” - were deeply unpopular with customers.

The TV chef approached the chain in 2007 and persuaded them to let him film a three-part documentary for Channel 4 called Big Chef, Little Chef, focusing on his efforts to revamp its restaurant on the A303 at Popham, Hampshire.

Little Chef allowed him to change its decor and even install urinals playing recordings of Spike Milligan reciting nonsense verse.

But Little Chef said the experiment had not worked - and Blumenthal had “taken everything away from its core”.

“The problem is that no one wants his food. None of his dishes are popular,” said a spokesman.

“We’ve dropped all his dishes from the ten restaurants where his food was available. That’s all gone as of this week. He’s been wiped off the menu. Little Chef needs to get back down to earth and that’s what we’re doing.” 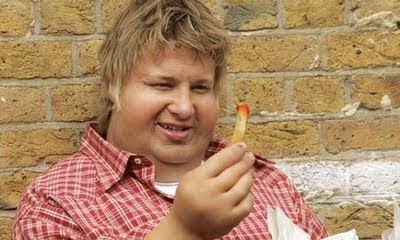 Overweight healthy eating guru Jamie Oliver has had his Twitter account hacked with an advert for a diet fad that claims users can lose “23lbs of belly fat in one month”.

The celebrity cook tweeted a series of links to a bogus woman’s health magazine advertising the weight-shedding benefits of something called the Garcinia Cambogia bean diet.

His fans quickly noticed the hack, and minutes later Oliver deleted the messages, which said: “Lose 22lbs. of fffat in 29 days” followed by a link.

Oliver then sent out a tweet to his 3.3 million followers, saying: “Whoa sorry guys looks like i got hacked!! Sorry to all looking in to it now. JOXX”

Others used the opportunity to poke fun at the TV cook, with Luke Lewis writing: “Jamie Oliver's tweets are more lucid than usual this morning.”

An hour later, and without any apparent irony, Oliver then sent out a Twitter message to his fans plugging a new “naughty, filthy” chocolate cake for one of his many restaurant chains.

“Help me guys I'm Just about to put this chocolate cake on a menu for Jamies italian & its a really painfully good naughty filthy elegant chocolate dish what can I call it ???

What a waste of a golden opportunity though, as chef Neil Rankin put it - breaking into Oliver’s Twitter account and just posting spam.
at 1:38 pm 1 comment:

I've often found it incredible the lengths some people will go to get a free drink or meal. When I started my first job working behind a bar, I was warned about a customer who was renowned for trying to cadge free pints.
He was known all around the village where I grew up. A huge, button-eyed man with the longest eyebrows I've ever seen. He always wore a grubby tweed jacket covered in fag burns, and spoke with a wonderfully-rehearsed Woosterian accent.
On my first night, he pulled up in his invalid carriage and ordered a pint of real ale. He sniffed it, held it up to the light like a real ale enthusiast in a fisherman's jumper, then turned his back to the bar briefly and downed half the pint.
He turned back with foam on his nose and a look of absolute horror on his face, coughing and spluttering, and pointing at the now cloudy pint, and demanded another one. He pulled the stunt again, but this time I spotted him dropping in a pinch of flour from his pocket.
But it was small beer compared with the fraudster jailed today for trying to get a free curry from the Jamal Indian restaurant in Middlesbrough - by doctoring his lamb bhuna with pubic hair.
Lee Tyers, 40, from Yarm, was caught on CCTV putting his hands down his trousers as he sat in the restaurant and then garnishing his food.
He told staff he'd found the hair in his food in a bid to get out of paying his £39.55 bill.
Restaurant owner Jamal Chowdhury told the court he'd known Tyers for 18 years, but was owed £110 for unpaid meals.
The crook told staff he had cash to pay, before he and a friend ordered two lamb bhunas, pilau rice, naan bread, lager, a chapati and a shish kebab.
The pair ate most of their food, and then Tyers complained to a waiter about finding pubic hair in his bhuna. They then left the curry house without paying.
Mr Chowdhury told Teesside Magistrates' Court: "I told him all the staff have black hair and this is brown - it’s not our hair."
Tyers was found guilty of false representation and jailed for two weeks and ordered to pay £39.55 compensation.

MORE: Why You Should Never Send Back Food In A Restaurant
at 8:42 pm 1 comment: