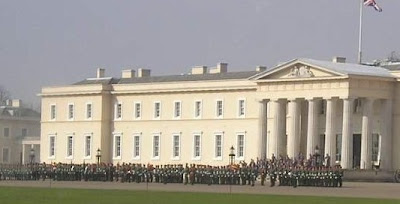 A chef and a waitress have reportedly found themselves in hot water for romping on the lawn at Sandhurst - in full view of summer party-goers.

The pair allegedly got carried away in front of revellers at the Royal military academy, where Princes William and Harry trained to be officers.

The Sun said the male cook and the much-younger waitress were part of an end-of-term party for caterers and maintenance workers at the elite Army college.

Staff were enjoying a barbecue and disco in a marquee when the randy couple sneaked outside and cavorted on the lawn.

One shocked woman guest quoted by the paper said: "They had obviously had a few drinks and they didn't care who saw them.

"They looked really caught up in the moment. I couldn't believe it. I didn't know where to look."

The claims will come as an embarrassment to the pair's employer ESS Support Services, which has just won a five-year £40m contract at the world famous academy in Camberley, Surrey.

But a spokesman for ESS – part of the Compass Group - told the paper: "We are investigating and expect disciplinary action to follow."
at 12:45 pm 1 comment:

Email ThisBlogThis!Share to TwitterShare to FacebookShare to Pinterest
This blog was brought to you by the words... catering contract, chef, Compass, ESS Support Services, Sandhurst, waitress 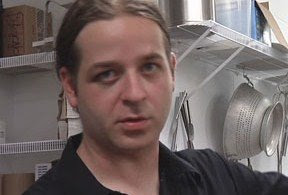 A chef has told how he fought off a man in a gorilla suit trying to rob his restaurant.

Scott Sanders was taking a bag of rubbish out to the skip at the back of Jimmy's Japanese Hibachi, South Carolina, when he was punched in the face by the costumed crook.

The two exchanged blows before Sanders, 21, managed to break free and run back into the restaurant.

The man in the gorilla suit chased after him and forced his way into the kitchen where he got a nasty surprise.

“I tried to shut the door, but he pulled it open. We wrestled and I fell to the ground where I have my little knife set with my cleaver on top,” Sanders told WMBF News.

“He runs up towards the cash register, so I grab the cleaver, run right up behind him and get him right in the arm.”

The man then fled empty-handed with the meat cleaver still stuck in his arm.

“The only thing I was thinking was I’ve got to get away from this freak,” said Sanders. “This is the craziest thing that’s ever happened in my life. I’m glad it was me rather than anybody else – and I’m glad that he wasn’t armed.

The chef is now back at work, nursing a very impressive black eye. Watch his video here...

Now I don’t want to make light of his ordeal, and I would never, of course, accuse a TV reporter of exaggerating a story, or a restaurant for that matter – in fact, I'd be the last person - but in the split second that the camera zooms in on his black eye, can’t you see the faintest tinge of mascara?
at 1:29 pm 3 comments:

Email ThisBlogThis!Share to TwitterShare to FacebookShare to Pinterest
This blog was brought to you by the words... chef blog, cook, Japanese, meat cleaver, restaurant
Newer Posts Older Posts Home
Subscribe to: Posts (Atom)