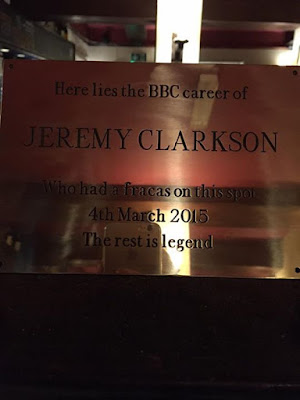 The hotel where Jeremy Clarkson threw his toys out of his V8 pram and punched a Top Gear producer has been given a plaque to commemorate the end of Clarkson's BBC career.

Managers at Simonstone Hall, in the Pennines, say a guest gave them the shiny plaque on Sunday night, and they plan to put it on the patio where the "fracas" took place.

Clarkson punched Oisin Tymon in the mouth after he told him he couldn't have a steak because the kitchen had closed and the chef had gone home.

Tymon, 36, was forced into hiding after receiving death threats from online trolls blaming him for Clarkson's sacking from the BBC2 car cockfest show.

Simonstone Hall - which brands itself as the "perfect haven to relax and unwind" - has not revealed who the plaque giver is, but seems chuffed with the gift.

"We think it would be quite appropriate to put it on the patio where the fracas took place," the hotel said on its Facebook page.
at 1:29 pm No comments:

Email ThisBlogThis!Share to TwitterShare to FacebookShare to Pinterest
This blog was brought to you by the words... BBC sacking, hotel, Jeremy Clarkson, Simonstone Hall, Top Gear

How To Fillet A Flat Fish

The trouble with learning how to fillet fish is there are so many different methods. But if you really want to know how to do it, ask a fisherman - they do it every day.
Here, Billy The Fish shows how to prep a flat fish into two or four fillets...
at 8:05 pm No comments:

Email ThisBlogThis!Share to TwitterShare to FacebookShare to Pinterest
This blog was brought to you by the words... filleting fish, flat fish, how to fillet fish, plaice

How To Fillet A Round Fish


The trouble with learning how to fillet fish is there are so many different methods. But if you really want to know how to do it, ask a fisherman - they do it every day.

Here, Billy The Fish shows how to fillet a cod the right way...
at 7:52 pm No comments:

Email ThisBlogThis!Share to TwitterShare to FacebookShare to Pinterest
This blog was brought to you by the words... cod, filleting fish, fish, fish fillet, fish prep, preparing fish 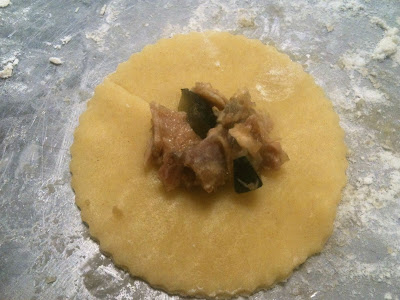 This is a classic French pie pastry, which works well for both sweet and savoury dishes. It's almost the same as traditional short crust pastry - which uses one portion of fat to every two of flour - but uses egg and a higher fat ratio (64% rather than 50%) and rolls much better.

It also has a richer flavour and crumblier texture, and is perfect for Cornish pasties or similar. Indeed, we used this to make amuse bouche pasties filled with confit pheasant and grapes for a function at the college where I'm studying my Level 2 NVQ Diploma in Catering (see pics below). 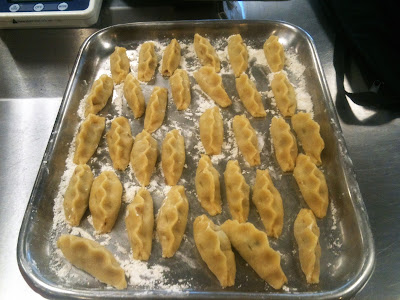 As with all pastries, it's vital not to overwork the dough. Just bring it together with a spoon, and when using your hands, use your fingers rather than the heel of your palm as you would with bread dough, as the heel is the warmest part of your hand. It's also essential to chill the dough well before you roll it out.

Use chilled butter straight from the fridge and cut it into small squares. Sieve the flour and salt into a bowl and add the butter. Using the tips of your fingers, crumble the flour and fat together to make breadcrumbs. 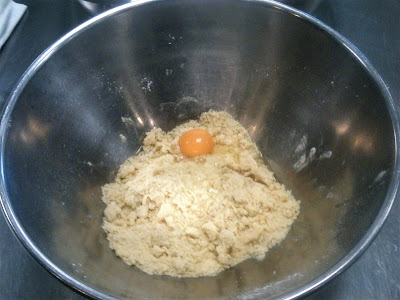 Then add the egg and water, and using a spoon, work it all together into a ball. Wrap in clingfilm and leave in the freezer for 20 minutes. 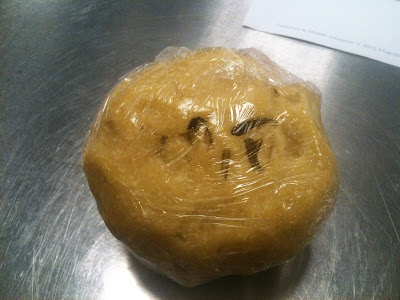 Email ThisBlogThis!Share to TwitterShare to FacebookShare to Pinterest
This blog was brought to you by the words... butter, confit phesant and grape pasties, Cornish pasties, flour, pate brisee, pies, shortcrust pastry, tarts 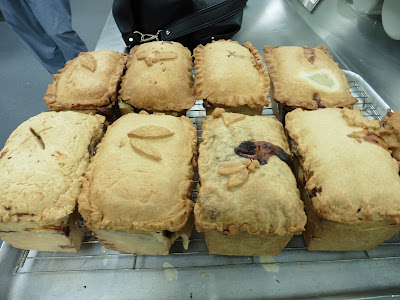 We made this for a mediaeval banquet for the catering college's restaurant - I'm not sure what is particularly mediaeval about it. But it is a great recipe nonetheless, and a fantastic winter warmer.

It uses hot water crust pastry - and it worked really well. It had the sort of crunch you get from a good pork pie, but was still moist and not too biscuity. We cooked the pies in a steam oven, but you can get near this by using a normal oven and putting a tray of water on the bottom rack.

Sieve the flour and salt into a bowl. Heat the water in a pan, and when boiling, add the butter and lard. Stir until the fat has dissolved, then pour into the flour. Let it cool slightly, then knead it for a few minutes to form a ball with the consistency of Play-doh. Cover the dough to stop it drying out while you get on with the rest of the ingredients. 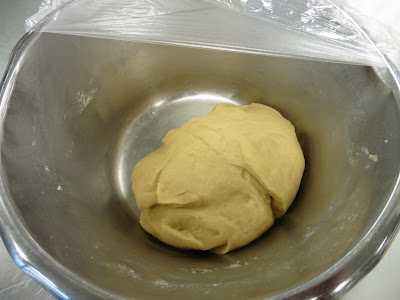 Take a medium-size loaf tin and brush the inside with oil. Then cut a piece of greaseproof paper the width of the tin base, but long enough so it hangs over the ends. Line the tin making sure a few inches of paper are sticking out on either end - you'll use these as 'handles' to remove the pie from the tin. Brush the paper with oil. 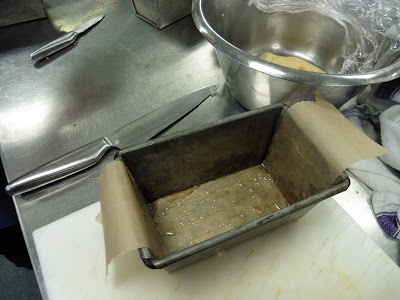 Then this is where the Play-doh consistency comes in. Take pieces of dough, and flatten into patty shapes and form the pie crust, making sure you push it into the corners. Make sure the crust is about an inch taller than the loaf tin. You want the crust to be about the width of a pencil. 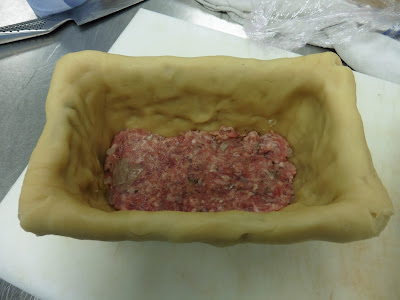 Next fill with the meat mixture. You can use whatever you want for this - thinly-sliced pork loin with finely chopped bacon and onion works very well. For ours, we used freshly-minced venison and wild boar. We put sage, pepper and salt in the pork, and nutmeg, salt, pepper and mustard powder in the venison. 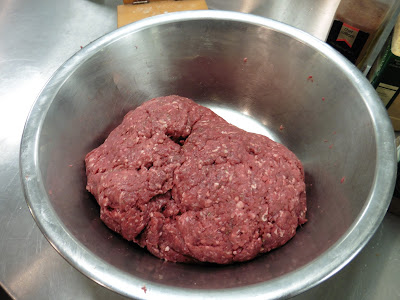 We then fried off a little of each to check the seasoning. The tutor said the venison was too "tight", so we added eggs, breadcrumbs and red wine to loosen it up.

We then built up the pie, starting with a 100g layer of pork, then a 100g layer of venison, and so on, so the pie had a two-tone effect. When the pie was filled an inch past the top, we rolled out the rest of the dough and cut out a piece for the lid. We moulded the overhanging dough into the lid and then trimmed and fluted the edges. 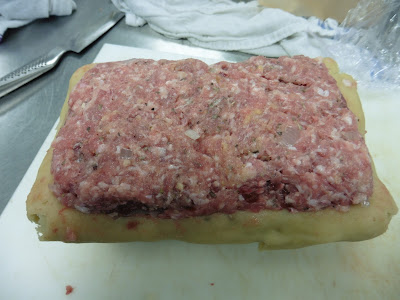 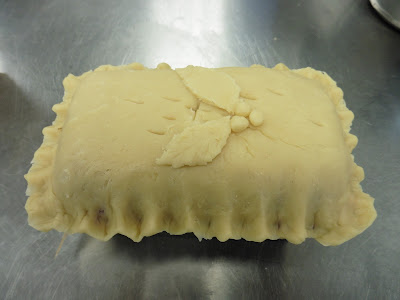 We cut a hole in the top to allow the steam to escape, and baked the pies at 160C in a steam oven for about an hour. You know it's ready when the middle of the pie is 75C. Take the pie out of the oven and carefully remove from the tin using the overhanging paper. Then let them cool on a wire tray. 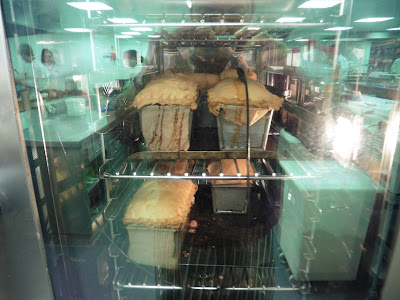 Meanwhile, we had made chicken stock from trimmings from a dish the other Level 2 NVQ Diploma in Catering class had made. When this was ready we boiled down a couple of litres and added enough gelatine so it set easily in the fridge. We poured this through the pie holes and then let them sit in the fridge for the jelly to set.
at 5:48 pm No comments:

How To Smoke Salmon In 13 Minutes 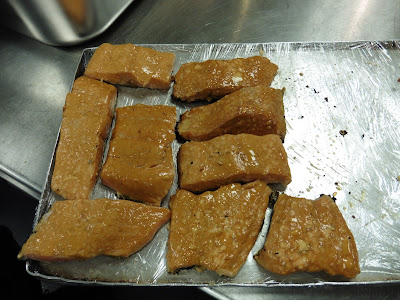 This is a dish we knocked up for a function night at the college restaurant - a supreme of salmon smoked in lemon and ginger tea, and then pan-fried until the skin is crisp. It was served with roasted cherry tomatoes and spinach.

You start by scaling and filleting a salmon and then cut each side into supremes the width of your middle three fingers. As you slice each supreme, turn the filleting knife with a hand motion as thought unlocking a door and this will give you a nice, curved effect to the pieces. 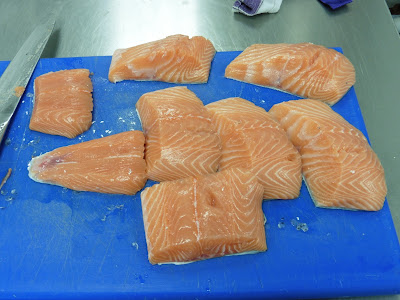 If you don't have a stove-top smoker, you can easily make do with a metal tray, foil and a wire tray to put the fish on (the wire tray obviously needs to be small enough to fit inside the metal tray). You also need oak or similar saw dust or wood chippings and/or tea leaves for the smouldering of.

Put a couple of handfuls of saw dust in the metal tray and spread over the bottom evenly. Then sprinkle three lemon and ginger tea bags - or a similar amount of loose tea - over the wood. Put the wire tray inside and cover tightly with foil. Put the tray on a medium heat on the hob and wait until you can see smoke escaping from the foil. 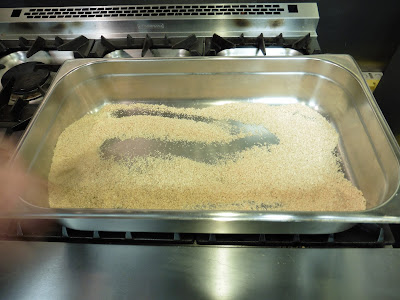 Lay the salmon pieces skin side down on the wire tray, and then recover with the foil. Put the tray back on the heat for one minute to let the smoke build up again. 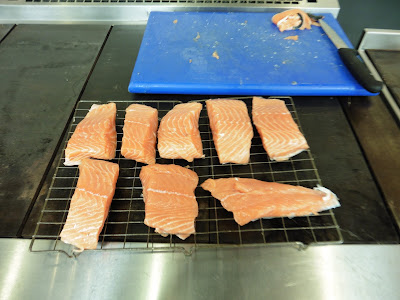 Then take the tray off the heat, and leave covered for 12 minutes. Remove the salmon and you'll find it has a yellow-orange patina of smoke.

We then vac-packed ours, two in each bag, ready for service. 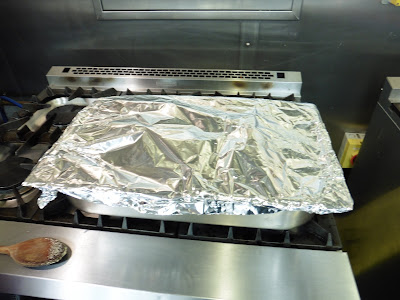 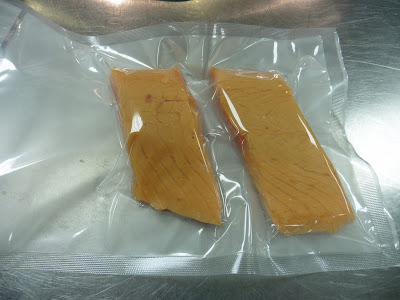