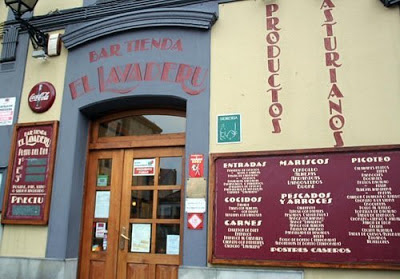 A Spanish chef has been charged with trying to poison 10 of his fellow cooks over a six-year period by secretly adding toxic drugs to staff food.

The unnamed 55-year-old assistant cook, who worked at El Lavaderu bar and restaurant in the coastal city of Gijon in northern Spain for seven years, is accused of 14 counts of attempted murder and is being held in custody awaiting trial.

His kitchen colleagues phoned police in October last year when they became suspicious after repeatedly falling ill. The only people at the cider house not to share symptoms were the suspect and his girlfriend, who also worked there.

Officers tested plates used for staff meals and found traces of calcium cyanamide, a potent chemical used to treat chronic alcoholism, the Daily Telegraph reported. It causes sickness and palpitations if mixed with alcohol and can have fatal results if taken long-term.

They are also re-examining the death of the former head chef who died from a heart attack in May 2011, and may exhume his body to see if there are traces of calcium cyanamide.

The previous owner also suffered a heart attack before selling the premises last year, and his wife suffered mysterious bouts of ill-heath. Both recovered after leaving the business.

Another chef has been to hospital three times over the last year and several other kitchen workers have frequently called in sick.

Police said they suspected "rancour" was the motive after reports there had been frequent arguments in the kitchen.

The current owner, Florentino Pérez, told Europa Press he also suffered from the poisonings but never imagined the suspect was responsible.

"People loved him," he said, adding that the chef had been involved in a number of charities in the city. He confirmed the suspect, who suffered from alcoholism, was fired a month before he was arrested, but said that was due to a slump in business.
at 7:50 am 1 comment: 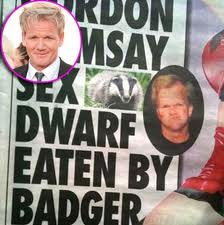 Gordon Ramsay has been caught telling pork pies again after announcing he is to close his flagship restaurant for a revamp in a bid to keep his three Michelin stars.

The celebrity chef told American food magazine Bon Appétit he’d had a conference call with bosses of the French tyre guide on Friday to tell them that Restaurant Gordon Ramsay in Chelsea, London, would be shut for two months for “an amazing new refurb”.

“Because you get criticised easily. ‘Well, it’s not worth three stars anymore, he’s cashing in, he’s never there’ - all those kinds of things. So you gotta silence those critics by constantly reinventing.”

Reinventing? Perhaps it’s the truth the notoriously slippery chef is talking about in the taped interview. Because his restaurant in Royal Hospital Road has not held three stars the longest in Britain. Far from it. That honour is held by The Waterside Inn, in Bray, Berkshire, which has had three gongs since 1985 - a piffling 16 years before Ramsay got his.

Ramsay, 45, is right about one thing. He has had a lot of criticism for not being behind the stoves of his restaurants and for spreading himself too thin in his pursuit for world domination. Not least from some of his former lieutenants who emerged blinking from the shadow of his large posterior to open restaurants in their own name, without having the constant gall of Ramsay taking credit for their hard work while lounging around in the California sunshine.

But what has that got to do with a new paintjob and a bit of interior design? Is he so sick of the decor in his 45-seater eatery, if he can still remember where it is, that he can’t stand being there? Will the wonderful revamp mean he will spend more time sweating in his flagship kitchen, run by head chef Clare Smyth for the past six years, rather than parading himself in front of American TV audiences like a painted horse and playing MonkeyTennis? Unlikely if his past performances are anything to go by.

And how does a splash of sage green “silence critics” who accuse him of cashing in? Ramsay - who has just opened two new eateries in Las Vegas, Gordon Ramsay Pub & Grill and Gordon Ramsay BurGR (GR, geddit?) and is to launch a London restaurant with David Beckham - has been cashing in and embellishing the past ever since he was in short trousers.

First, with his lie about having played first-team football for Glasgow Rangers, before his career was cut short by an injury, creating the myth of the tragically injured football star who re-invented himself as a chef. And secondly with his TV fame and the dark PR arts he uses to keep his name in (and out) of the newspapers.

As he goes on to say in the interview: “It (cooking) is a tough business. A very tough, demanding business. And it’s slightly Machiavellian in that you need to be strong, especially at this level.”

Slightly Machiavellian? I think Niccolo would have been proud. Perhaps he should say longest in the world in the next US interview, and say he was soccer captain for Manchester United. After all, it’s important to keep constantly reinventing.

:: Gordon Ramsay: A Cut Above The Rest?
:: From Ramsay To Rourke
:: Go Easy On The Ham Ramsay!
:: The Night The Roux Brothers Had Bread Rolls Hurled At Them
:: What's Next For Gordon Ramsay? Monkey Tennis? 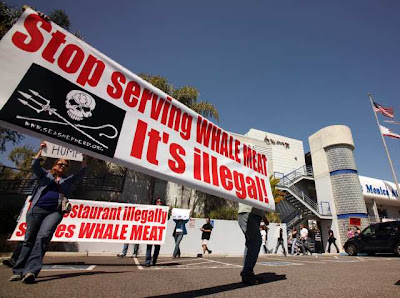 A head chef faces up to 67 years in jail after he was allegedly caught in an undercover sting selling illegal whale meat at a trendy sushi restaurant in California.

Kiyoshiro Yamamoto, 48, from Culver City, is accused of nine counts of conspiracy to import and sell endangered Sei whale meat from 2007 to 2010, a violation of the Marine Mammal Protection Act.

Another chef, Susumu Ueda, 39, from Lawndale, and the restaurant’s parent company, Typhoon Restaurant Inc, have also been charged. Ueda faces up to 10 years' jail, and Typhoon a fine of up to £800,000.

The now-closed Hump restaurant was allegedly filmed by the team behind Oscar-winning documentary The Cove, which features covert scenes of the barbaric annual dolphin hunt in Japan (see trailer below).


One of the activists had been tipped off by friends in the music industry that whale meat was being served at the £200 a head restaurant in Santa Monica. They went along there with hidden cameras during the Academy Awards ceremony in 2010, and say they were given thick, pink slices of whale on the omakase menu, where chefs choose a selection of dishes for customers to try.

In the footage, the waitress can be heard calling the meat “whale”. It was also referred to by its Japanese name, kujira. The pair put the £40 dish in a bag and sent it off for DNA analysis to the Marine Mammal Institute at Oregon State University.

Scientists confirmed it was Sei whale, which are endangered but hunted in the North Pacific under a controversial Japanese programme that allows the killing of up to 1,000 whales a year under the guise of scientific research.

Police then carried out their own undercover operation and broke up the alleged smuggling operation. According to court papers, staff said the meat came from the boot of a Mercedes parked outside the restaurant.

Many top sushi restaurants serve unusual fish imported from Japan, and whale meat is often found in Tokyo markets. But campaigners said they had never heard of it being served in an American restaurant.

The Hump – apparently named after the aviation slang name for the Himalayas rather than the type of whale it (allegedly) sold - closed soon after the scandal.

On its website, bosses described the omakase menu as a “culinary adventure…created for you unlike any that you have previously experienced!” They added: “If you are truly adventurous (and have NO allergic or religious restrictions), we request that you leave yourself in our hands.”

Given there are only 54,000 Sei whales left in the world, it was a pity they didn’t mention ethical and ecological reasons as well.
at 2:36 pm No comments: 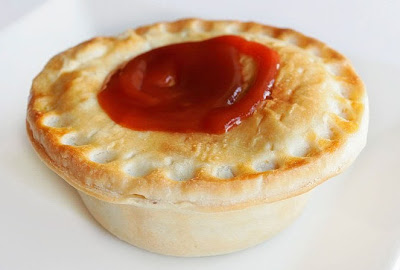 Prison pasties and pies labelled as Halal - where meat is slaughtered by hand and blessed by the person doing the killing - contained traces of pig DNA, the Food Standards Agency (FSA) confirmed.

Both the FSA and Ministry of Justice initially refused to name the UK supplier, but it has now emerged it was 3663 - a leading wholesale food distributor to 60,000 British restaurants, hotels and catering firms.

Under Islamic law, Muslims are strictly forbidden to eat pork, and Justice minister Jeremy Wright said the incident was "absolutely unacceptable" and prison bosses were investigating "as a matter of urgency".

A spokesman for 3663 said the company was "shocked" to find five of its Halal beef pastry products contained pork and they had been immediately withdrawn from sale.

He said they had been supplied to prisons and nowhere else, and had come from McColgan Quality Foods Limited, a Northern Ireland-based company accredited by the Halal Food Authority.

"This is a wholly unacceptable situation and one that we deeply regret," the spokesman added.

He said 3663 - the numbers corresponding to the letters “FOOD” on a telephone number pad - carried out the tests after initially fearing the five products may have contained horsemeat. Instead they contained pork.

It comes after beef burgers sold by Burger King and some supermarket chains were found to contain horsemeat. An extra value burger flogged by Tesco contained nearly a third horsemeat, leading the retail giant to give full-page apologies in national newspapers.

The Ministry of Justice said the results of the tests became known on Thursday. It has not been disclosed how long inmates have been eating the pork-tainted products for.

A spokesman said: "All prisons have been informed about this very regrettable incident and we reported this issue to the Food Standards Agency immediately."

The FSA is now investigating whether the contaminated meat pies - which were labelled and served as Halal - were distributed more widely across the UK.

Editor of the Muslim News, Ahmed Versi, said the development was disturbing.

"This is very serious because no Muslim would ever eat pork meat - anything to do with pork - and it must be very distressing for those in prison who have been given this meat to realise they may have been eating food which was contaminated with pig," he told the BBC.

COMMENT: People have a right to know what food they are eating, and retailers and suppliers have a duty to describe their products correctly, and should not be allowed to cut corners by secretly padding out food with cheaper meats to boost profits.

There is little doubt the latest lapse will have offended and distressed high numbers of Muslim prisoners and their families, and will be another serious blow to the British food industry, which already has the stench of Soylent Green surrounding it.

:: Horse Meat Found In Tesco Burgers - Every Little Pony Helps
:: What's Really In Your Lamb Doner Kebab?
at 6:15 am 2 comments: