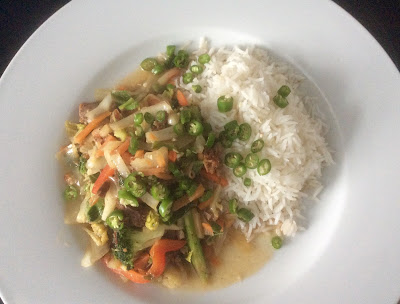 I used to eat this dish, and countless variations of it, in cheap, road-side cafes and stalls when I was working in Cambodia’s stifling capital Phnom Penh. The heat meant you were never that hungry, just thirsty, and I drank more melted ice than beer.

But this meal and other stir-fried dishes like it were perfect for kickstarting the appetite without bloating you out, and more importantly they were delicious. They were never over seasoned or spiced, and there was always a plastic tray of condiments on each table so you could tweak the flavour as you wished – fish sauce, soy sauce, sugar, lime wedges, ground white and black pepper.

The stir-fried vegetables came in numerous permutations, sometimes with meat or fish, sometimes without, and were often flavoured with oyster sauce. They were cooked fresh in front of you and served in silver bowls, with another silver dish containing sticky rice. And the thing I loved most was you always got a ramekin of thinly sliced chillies on the side, that gave a burst of fire and helped the whole thing down. 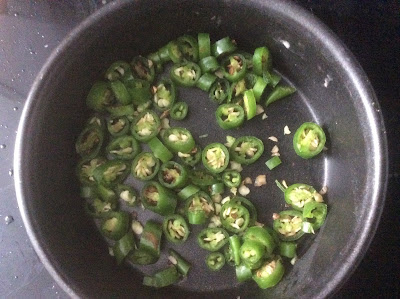 Those were wonderful days on the whole, and I miss them dearly. And occasionally when the British weather gets the better of me, and gives me a shot of the low-down blues, I make myself one of these dishes, like this one I made for lunch today – stir-fried vegetables with pork. Which if my very rusty Khmer doesn’t embarrass me too much is known over there as sach chrouk char pale khieu.

Anyway, this is how I made the dish and it turned out pretty well. It goes without saying that you can substitute pretty much any other protein for the pork – popular choices in Cambodia are frog, shrimp, squid, crab, fish, eel, chicken, beef and egg. Or just leave it out and have vegetables, maybe with nuts added.

In fact, one of the most memorable dishes I had was fried cabbage and rice with lots of chilli on the side, cooked as a staff meal at one of the restaurants I was working in. It doesn’t get much simpler than that, but they do say the secret of being a good cook, or any other artist for that matter, is knowing when to stop.

Again, for the vegetables, it really doesn’t matter which ones you use. Cambodians cooks are very skilled at making the best of what they’ve got, which for the vast majority of Khmer people is usually very little. I used broccoli, onion, cabbage and carrot, and a few slices of roast pork that were left over from the weekend. The secret is to cut everything small, so it cooks quickly.

Nearly all Cambodian dishes start with fried garlic, so I heated some oil in a pan, sliced two fat cloves of garlic, and fried them, stirring away until they were just turning nutty and brown. Then I added a few thin strips of roast pork. Probably no more than about 50g or so – in keeping with the Cambodian way of making a little meat go a long way. 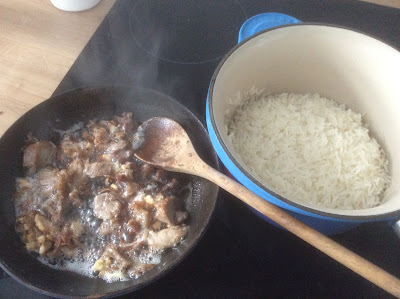 After all, it’s the flavour that is the main thing – and there is no better way of ruining a stir-fry, aside from burning or over salting it, than drowning it in meat or fish. I fried this for a couple of minutes until the oil was frothing, then added the vegetables, and fried them for a couple of minutes – they generally need very little more than this if they are cut properly. 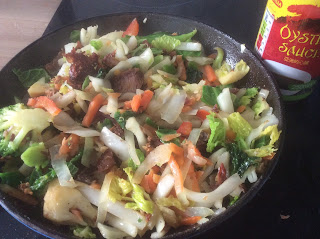 Just before the end, I added the seasoning – two level tablespoons of oyster sauce, the same of water, then a good sprinkle of fish sauce (about two level teaspoons) and the same of lime juice, and finally half a teaspoon of sugar, and a good grind of white pepper. It went on a plate with rice, and of course thinly sliced chillies, and was demolished quickly, harkening back memories of warmer times.
at 3:56 pm 2 comments: