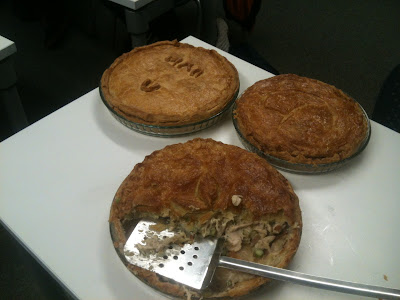 The pastry for this pie comes from one of the apprentices on my cheffing course. He modestly says he's only good at turning potatoes, and jokes that if he was a superhero his one special power would be the ability to instantly turn vegetables into perfect, seven-sided barrels. However, he's pretty good at making pies as well.

He should be really, because the rest of the week, he works at a gastropub that specialises in pies. Every morning, he makes the pie dough using this recipe below. The chef assessor spent a few hours in his kitchen, ticking off units in his apprenticeship file, and came back raving about the pie crust.

It was deemed so good, he asked the apprentice to fill in for our masterchef lecturer one morning to show us how to make the perfect pie. "I don't want to blow smoke up your arse, but that's probably the best rough puff pastry I've ever tasted," the masterchef told him afterwards before trying to sell us the pies we'd made at a fiver a pop, pointing out that they'd probably be £25 in a deli.

At the gastropub, they use shortcrust pastry for the bottom of the pie and rough puff for the top. But we used rough puff for both. It rises very well and is deliciously crispy owing to all the butter in it. The pies in the picture above should probably have been cooked about five minutes less, as the pastry is a little too brown, but some idiot, uh hum, forgot to put the timer on the oven. I had nothing to do with the ludicrous Man U decoration though.

Cut the butter into cubes, about the size of Oxo cubes. Sieve the flour into a bowl and add the butter cubes. Mix briefly with a wooden spoon until the cubes are evenly covered in flour. Add cold water, a little at a time, and stir until the pastry comes together in a ball. Don't over mix it - you still want pieces of butter in the pastry.

Repeat this three more times, then put the pastry back into the fridge. Chill for another 20 minutes, then take out and repeat the procedure. Chill until ready for use. If you have more pastry than you need, wrap it in clingfilm and freeze.

Put your fingers under the skin at the neck end and carefully pull the skin from the chicken. Chop off the feet and pull the leg skin off. Put the whole skinned chicken in a stock pot and cover with water. Add the celery, onion and spices. When the water starts to boil, turn the heat down and cook for one hour. 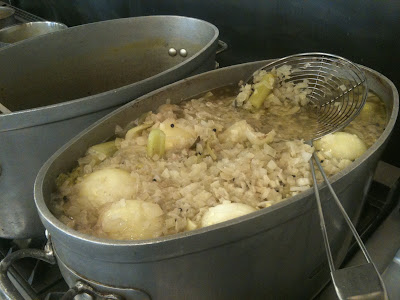 Take the chicken out, and using a probe, check the inside of the thigh is at least 65C. Even when it is 85C, the chicken meat is still moist because it has been cooked in a wet heat rather than dry heat. But I find about 70C is the best. 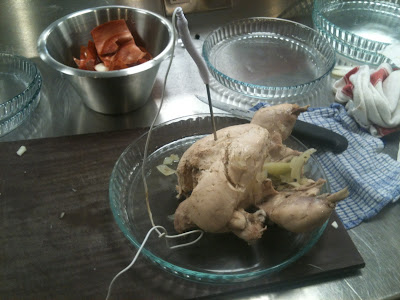 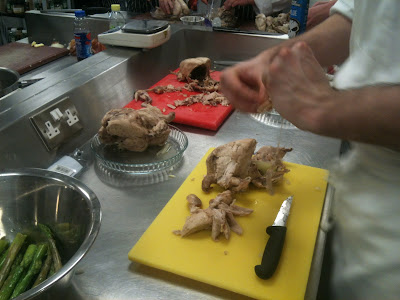 Cut off the bottom inch or so of the asparagus. Then boil the spears for two minutes. Take out and refresh in iced water. When cold, slice into discs, about the thickness of £1 coins. Put in the fridge. 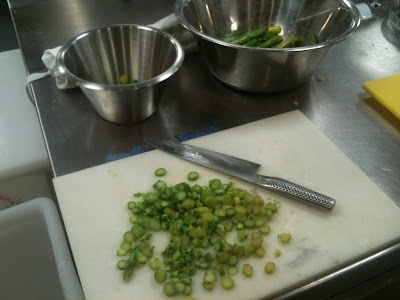 Chop the onion very finely and fry in the butter over a low heat until the onion has 'melted'. It should be soft and very yellow. Add the flour and stir well. Cook the roux over a low heat for three minutes until coloured slightly - make sure it doesn't catch on the bottom of the pan. 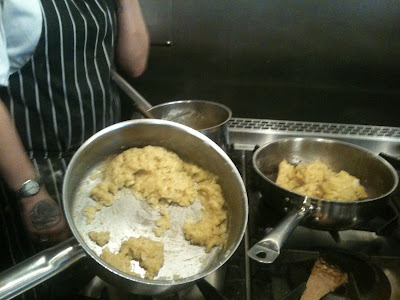 Heat up the sieved stock from the chicken if it has gone cold, and add a ladle at a time to the roux, stirring constantly, and adding the next ladle when the water is absorbed. Then whisk the rest of the stock in, and simmer for 10 minutes. Add salt to taste. Chill the sauce in the fridge. 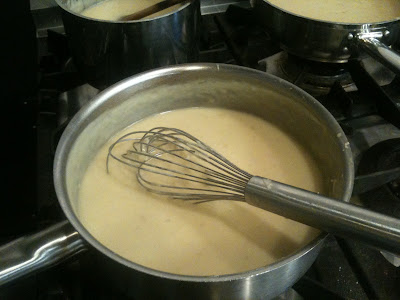 When the chicken meat, asparagus and veloute sauce are all chilled, mix together in a bowl. Add salt and pepper to taste.

Lightly flour the work surface and roll out the pastry to about 1/2cm thick. Cut out a circle three inches wider than the pie dish's circumference. Grease the pie dish with butter and sprinkle with flour. Then lay the pastry circle in the dish, pushing down into the corners. Leave the extra pastry hanging over the edge of the dish. Fill the pie with filling. 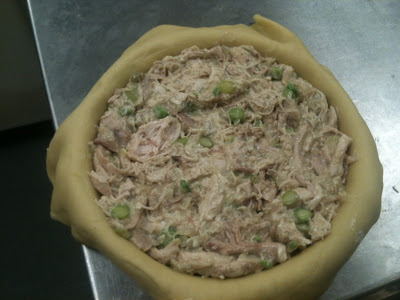 Roll out another circle of pastry the same thickness as before, and lay on top of the pie. Push it down on the pastry beneath. Then hold the dish up with one hand and with a knife in the other, neatly trim off the excess pastry. Crimp the edges together using your thumb and index finger on your left hand (if right-handed) and thumb on your right hand. Glaze the top with beaten egg yolk. 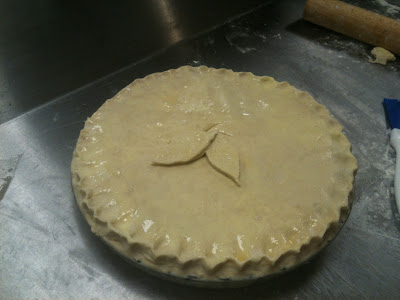 Email ThisBlogThis!Share to TwitterShare to FacebookShare to Pinterest
This blog was brought to you by the words... asparagus, chicken, flour, onion veloute, pie, poached chicken, rough puff pastry, stock

January Vegetables And The Healthiest Ways To Cook Them 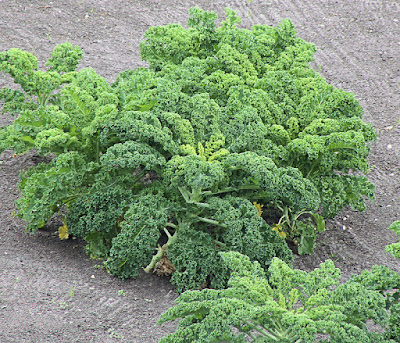 The following are some of the main seasonal vegetables for January:

Cooking: Kale can be cooked in a number of ways, including stir frying, steaming, microwaving, and boiling.

The healthiest option is steaming over a couple of inches of water, rather than boiling. Because the kale is not submerged in water, it loses less of its water-soluble nutrients such as vitamins B and C.

Some people eat kale raw by adding it to smoothies, but research shows cooking can actually make some vegetables healthier by boosting certain nutritional components.

Cooked kale, for example, has a higher level of carotene than in its raw state. Carotene is converted by the body into vitamin A, and is important for eyesight and the immune system. Cooking also boosts other fat-soluble nutrients like vitamins D, E and K.

So steamed kale – the healthiest cooking option – has far less vitamin C than raw kale, but has more carotene. This means it’s probably best to eat a diet of both cooked and raw kale.

Cooking: Like kale, carrots can be cooked in a number of ways, including stir frying, steaming, microwaving, boiling and poaching. The healthiest option is steaming. Carrots can also be roasted or grilled. All three methods destroy less nutrients than boiling and do not have the added fat needed for frying. Roasting also gives carrots a great taste, extracting their natural sweetness.

Cooking: Again, steaming is the best method for leeks as less water-soluble nutrients are lost compared with boiling. This is also healthier than frying as it does not require the addition of fat.

Cooking: Steaming would once again be a healthier method of cooking than boiling or frying.

Cabbage can also be eaten raw as a salad, preserving its water-soluble nutrients such as vitamins B and C. If it is going to be boiled, a healthier way of doing this is to the reduce the amount of water it is cooked in – which decreases the loss of nutrients – and also reducing the cooking time so the cabbage is not cooked longer than necessary. The cabbage water can also be used as a base for soup.
at 5:47 pm 1 comment: