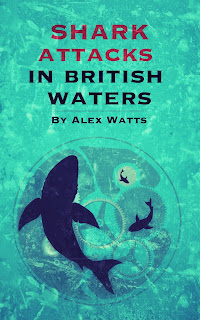 My new book Shark Attacks In British Waters is finally out. It's a bit of a departure from my usual food ramblings, but I fancied writing something different, and it was great fun researching it; I found some great stories along the way...

It came about from a drunken evening at a fishermen’s club in Hastings, East Sussex. A friend bet me £100 that there had never been a shark attack in British waters. I decided to take him up on the wager and this book is the result of that bet.

In the book, you’ll read about the mysterious death of a teacher who vanished while bathing off the Yorkshire coast. His inquest heard his left shoulder had almost been wrenched off by a “powerful animal” and there were other bite marks across his body. You’ll also meet the swimmer reportedly chased by a 12ft shark at Brighton beach. When they cut open the shark’s belly, they found a human head inside.

There were also three reported attacks on bathers in the chilly waters of Edinburgh. Not to mention the case of the man who lost a leg while swimming in Wales. The police constable who staggered on to the beach, bleeding from bite marks. The crab fisherman who brawled with a shark in waist-deep water in Norfolk. And the woman bitten in half in Belfast Harbour.

These are just some of the reported shark incidents I found while trawling through the British Library’s newspaper archives and other sources. Some happened centuries ago, some were a lot more recent.

There were also numerous sightings – and in a few cases alleged captures – of great white sharks in UK seas. Many were from Victorian times and earlier – which may throw light on some of the reported attacks on British bathers in those times. Some fishermen think there are still white sharks living in UK seas. The debate still rages. And not a summer goes by without a story of that most fabled of sharks off Cornwall.

Other species, including the basking shark and thresher shark, have reportedly attacked boats. The worst case was a triple drowning in the Firth of Clyde in southwest Scotland when a shark capsized a wooden sailing dinghy. Two men and a young boy died. Other attacks were reported and the “basking shark menace” was raised in Parliament.

Fishermen were afraid to go out on their boats and there were calls for the Navy to be brought in to blow up the sharks. Some claimed the attacks were the work of a rogue basking shark, said to be 40ft long. Others believed it was a species not found in Scottish waters. They gave it the name “Man-Eater”.

All the shark encounters took place as described in contemporary newspaper reports and other historic sources. To reconstruct the events that took place in each incident, I have interviewed marine biologists and ichthyologists, and quoted current scientific papers to get an understanding of the shark’s actions and what species of fish may have been involved.

The book is a history of reported British shark attacks, presented in chronological order from the late 1700s to the present day. It is worth adding that there were probably shark attacks in British seas before the 18th century, but none have been recorded by history.