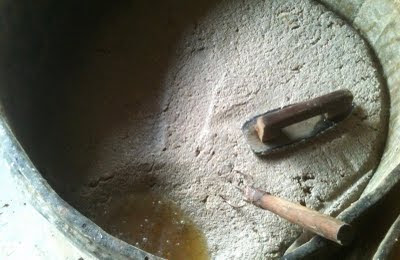 For the past few weeks, I’ve been staying in a guesthouse in Phnom Penh, writing every day in the restaurant downstairs, and trying to get the printed version of my book sorted. It’s a relaxing place, filled with backpackers all tapping away on their computers and updating their Facebook statuses as modern day travellers seem to do now.

It appears a lap-top, iPad, or at the very least a smart phone, are up there on the trusty travellers’ check list with sunscreen, sandals and mosquito repellent, which is very definitely needed in this bug-filled, thatched roof canteen.

Every hour a bus or a packed tuk tuk arrives with more tourists, some old, some young, some hauling monstrous backpacks that a small elephant would turn its trunk up to. Some are on their way north to Laos, some down to the coast to Sihanoukville, some are heading east to Vietnam, or west to Thailand, and some are just killing a day until their plane takes them back to their normal lives again, and the drudgery of a 9 to 5.

It’s like sitting at a crossroads watching the world go by. Other times, I feel like that bloke who lived in a French airport for six years. I feel mildly jealous of their energy and meticulously planned itineraries, but all most of them seem interested in is ticking off places they’ve been to.

None of them stay anywhere long enough to find out what a place is really like. How anyone can “see” India, Thailand, Cambodia and then Laos in two weeks - as celebrity chef Raymond Blanc just did before losing all his luggage and “Zen” on the flight home - is beyond me.

Occasional snatched trinkets of conversation drift over, but mostly I just tap away on my computer in the corner of the room, or offer the odd vehement curse as I try to resolve a formatting issue with my book.

Every day I eat the same two dishes - chicken porridge soup (bo bor sach moan) for breakfast/lunch, and prahok ling for supper (pic below). The owner, a fellow prahok addict, cooked the latter for me one day after I told her I was learning how to cook Cambodian food, and I’ve been ordering it ever since. 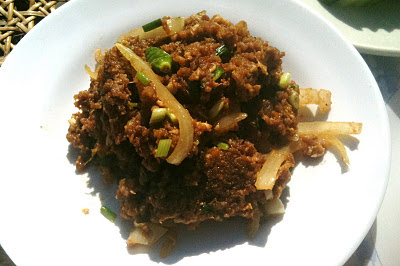 I eat so much of it, she even calls me Prahok Ling now, and is threatening to make me up a T-shirt with “I Love Prahok” on the back (which admittedly is a lot more original than the ubiquitous “No Money, No Honey” T-shirts that wide-eyed men of a certain age wear over here). But I can’t stop myself - it really is splendid.

And whenever I think I’m being odd, or noses are wrinkled when my dish laden with prahok arrives, I just look round at the backpackers eating their cheeseburgers and garlic bread, and wonder what the hell is the point of travelling 6,000 miles to eat Western food every day?

Prahok ling is fish paste fried with hand-chopped pork, onion, garlic, egg, and chilli. And it’s so strong there are strict Government laws in place to ensure you only get a small saucer of the stuff, which you eat with boiled jasmine rice and a plate of raw vegetables to take the edge off the extremely pungent taste. 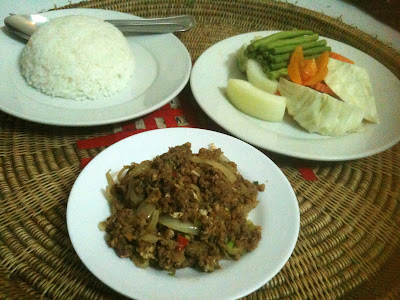 But I’ve always been into bold, salty flavours, and for me it’s absolutely delicious, and is something I’m definitely going to try to replicate when I get back to the UK.

Knowing that prahok will be as rare as rocking horse manure in Blighty, I’ve been trying to figure out how to do this. I bought a couple of tins of anchovies the other day at a criminal price, chopped them up, and fried them in place of the prahok. It was pretty good, but not the same...

But anyway, this is how the guesthouse owner makes hers. She starts by hand-chopping about 500g of pork shoulder until it is minced but still has texture, and then thinly slices two onions, and chops four cloves of garlic, and two red bird eye chillies.

She heats a little oil in a wok and fries the pork for a few minutes until it is browned. She then removes it from the pan and sets it aside. She adds a little more oil to the wok, and then fries the onion for a couple of minutes until soft, and then throws in the garlic and chillies.

She cooks it for another few minutes before adding the pork and a spoonful or two of prahok, and some lime juice to taste. She then stir-fries the brownish mixture for 10 minutes, and sets it aside to cool. She keeps the mixture in a tub in the fridge ready for service. 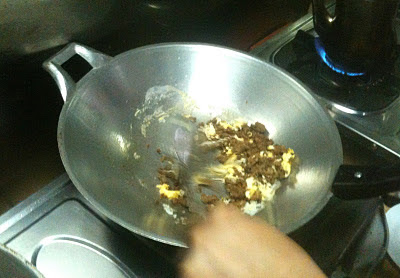 When an order comes in (i.e. me), she heats a little oil in a wok, and then adds an egg. She stirs away furiously until the yolk has just cooked, and then adds about 100g of the pork and prahok mixture, and one or two whole red chillies, and fries it over a medium flame for three or four minutes (see pic above). She serves it on a saucer with a plate of raw cabbage, aubergines, onion, and cucumber, and a small mound of steamed rice.

I can’t recommend it highly enough. And if I ever do a Cambodian pop-up night when I get back to the UK, or run a barbecued cow (ko dut) street stall (see pic gallery below), or open a cafe doing the odd Khmer special, or indeed pursue any other of my half-baked plans that seem to change daily with the breeze blowing in from the Tonle Sap River, then prahok ling will definitely be on the menu. 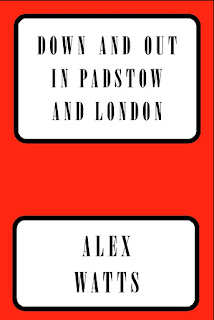 My new book on training to be a chef, including stints at Rick Stein's and the Fat Duck, is available to buy on Amazon for Kindle, iPad, iPhone etc. CLICK HERE to buy for just £2.05, about the price of half a lager.

"It's a bargain and an easy read, I didn't want to put it down." @Mcmoop

"Should be required reading for anyone who has ever dreamed of leaving the monotony of the 9 to 5 rat race to open their own restaurant." Breil Bistro

"A great read and should be a set text if you're considering a change of career, or God forbid, applying to Masterchef." richard
at 11:14 am

Email ThisBlogThis!Share to TwitterShare to FacebookShare to Pinterest
This blog was brought to you by the words... Cambodian cooking, Cambodian food, Khmer cooking, Phnom Penh, prahok, prahok ling, Raymond Blanc

"I Love Prahok" T-shirts could be a million dollar idea.

It's a pretty good idea isn't it, now you mention it. Might get a few printed. Hope the guesthouse owner doesn't claim copyright!

I eat all local food but NOT prahok! And after a year in Cambodia, not fried spiders or crickets either :)

I had prahok ling at a wedding,really liked it but didnt know the name,the family all amazed at a westerner liking prahok.Now if only I knew what the cambodian black pudding was called....