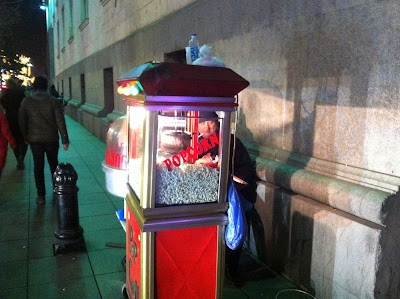 (Read part one of trip HERE)

It was a turbulent flight and the passengers clapped as the plane bumped to a halt at Kutaisi, the mediaeval capital of the Kingdom of Georgia. A man behind me shouted: “Bravo! Bravo! Bellissimo as they say in Italy!” A woman told everyone to remain in their seats until the seatbelt signs were off. She then spoke for a few minutes in Georgian. It was a soft, pretty language. There was the nasally sound of Russia and eastern Europe, but it was faster and more playful somehow.

A gale was blowing. The airport was modern looking and empty. There was only one other plane – another Wizz Air jet – on the tarmac. The queue at passport control was long and slow. The immigration officers seemed to be asking for every passenger’s life story.

When it was eventually my turn, a woman spent a minute flicking through my passport looking at the stamps and visas. “First time in Georgia?” she asked. I told her it was. She stamped my passport with a year-long visa, then handed it back and said “bye bye”. She seemed surprised and slightly suspicious when I said thank you. 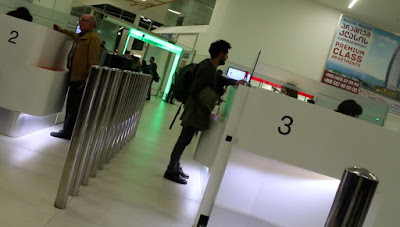 It was past midnight and there was a 30-minute wait for the bus that would take us through the mountains to the capital Tbilisi. I bought a large can of Georgian lager and a bottle of water for eight laris (about £2.50). I wondered how much change I’d have got out of a £10 note back at Luton Airport.

Then I thought better of drinking the beer; thinking about the five-hour bus ride ahead. I hadn’t had time to book a hotel and had no idea what I’d do when I got there at dawn. The bus was packed, mostly with British students. At first I thought they were part of a group tour led by an Asian man in his fifties who walked with a stick. He kept wandering up and down the aisle giving updates on when the driver was finally going to turn the heating down and put the ventilation on.

After another 30 minutes or so, the bus left the airport. We climbed slowly up through the mountains and I caught the occasional glimpse of the sheer side of cliffs. There was no yellow hum of city lights, just the twinkle of distant villages, like lakes mirroring the starry sky above. The roads were empty and we passed through endless hamlets where nothing stirred. Occasionally we’d crawl past a roadside café, but apart from the houses, the only buildings seemed to be gas stations, brightly lit and ghostly. There seemed to be so many that if you ran out of petrol you’d have less than a mile to walk to the nearest. I noticed the number of police stations too. Plush glass buildings with all the lights on, and the occasional police officer sitting at a desk doing paperwork. It didn’t make much sense. There wasn’t a soul on the road and no-one was up, and yet they seemed to have the police resources to stop a midnight riot in Paris. 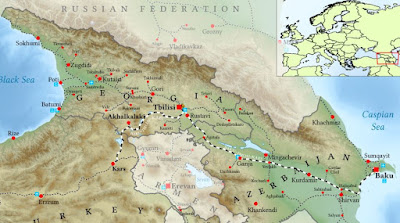 Behind me, an English man was talking on his phone to a woman asking for money. She kept saying: “Not good, not good. I worry much.” She said her rent was due and he eventually agreed to wire her some cash and top up the credit on her phone. “Okay I love you,” she said as the call ended.

At some point we stopped at some great monstrosity in the middle of nowhere that seemed to be half food hall and half supermarket. The man behind tapped me on the shoulder. He was wearing a bulging red fleece, black-rimmed glasses and had a grey quiff. He looked like a fat Stewart Lee. He handed me a five-lari note, and asked me to get him a bottle of water. I hadn’t even planned to get off the bus. I was slightly annoyed at first, but then I realised he used a wheelchair. I looked at the note – on the back was a drawing of a man in shorts holding a fish and a bucket. I handed back the note and said I’d get him some water.

The food hall was empty apart from the sleeping staff and our weary bus party. And we weren’t spending from the look of things. After another interminable, spine-crunching journey through the hills, we joined an empty motorway and picked up speed.

I nodded off and woke to the neon signs of casinos and grand hotels in Freedom Square, in the centre of Tbilisi, where someone had once tried to assassinate US President George W Bush with a hand grenade. In the centre of the square was a huge column, topped with a gold statue of Saint George, the country’s patron saint. In the Soviet era, a statue of Lenin had stood there, but it was torn down in 1991. 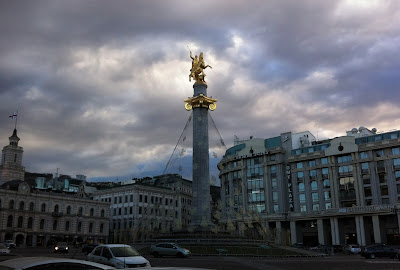 Everyone seemed to have someone waiting for them. It was 5am, freezing and I suddenly felt very tired and alone. The man with the stick began to hobble off towards a subway. Either he had lost his tour party or he didn’t have one to start with. He was clutching a Lidl plastic bag that presumably served as his suitcase. I wandered after him and quickly caught up. I asked him if he knew of any hotels that were open. There was a Marriott hotel up the road, but it looked hideously expensive.

Babar, as his name turned out to be, said he’d booked a bed at a hostel and I was welcome to follow him there. We walked for 10 minutes down Rustaveli Avenue, which I would find out later was Tblisi’s main street and named after the mediaeval poet Shota Rustaveli, author of The Knight In The Panther’s Skin.

The city was glittering with golden light. There were hundreds of angels blowing trumpets. They were hanging from wires across the road, lighting up the impressive Soviet architecture. The trees were wrapped in fairy lights. Everything seemed to be gold. I asked whether it was always like this, but Babar looked at me as though I was an idiot and told me it was Christmas Day. The Georgians apparently used a different calendar and celebrated it on January 7. New Year’s Day, confusingly also called the Old New Year, was a week later on January 14. I was worried there might not be room at the inn. If not, there were a few 24-hour bars and restaurants I could sit in until it got light, Babar said.

He said he’d stayed at the hostel a couple of times. It was his fifth trip to Georgia. He was planning to buy an apartment and had already seen a few on previous visits. Property was supposed to be cheap in Georgia, but Babar didn’t look like he had a fiver in his pocket the way he was hobbling down the road with an NHS walking stick, adorned with plasters, in one hand, and a carrier bag in the other. I liked him straight away. He had a confident, easy-going nature and told me about his many trips around eastern Europe. He said his mother had recently passed away, and looked close to tears for a second. “She was my strength,” he said. But he was soon back to his cheerful way.

What worried me was the thought of a hostel. I hadn’t stayed in one for years. The last one had been a homeless hostel in Amsterdam after I had my passport and money stolen and found myself pacing the canals with just six euros to my name. It hadn’t been a pleasant experience. There must have been 40 men in that room. And the smell is something I still remember. It was the smell of rancid vinegar. The time before that, I’d been bitten alive by bedbugs, but that had been a particularly filthy place even by Cambodian flophouse standards.

I was still toying with the idea of finding a bar and drinking myself steadily through morning until the check-in desks opened. But it was bitterly cold and I was worried that Christmas Day might mean all the hotels were full or closed. I was even less confident about finding a bar open at 5am. It certainly didn’t look like a 24-hour city. But Babar said I could probably find somewhere to drink. “Not that I’m calling you an alcoholic,” he said.

I was desperately tired. Even the worst bed in the worst hostel in Gomorrah was better than pacing the streets for a few hours, even if the angels were looking down. Babar told me Airbnb had started opening up in Georgia and they were ridiculously cheap. But he didn’t like the idea of staying in someone’s apartment. “I prefer hostels because you meet people,” he said. He was right about that.