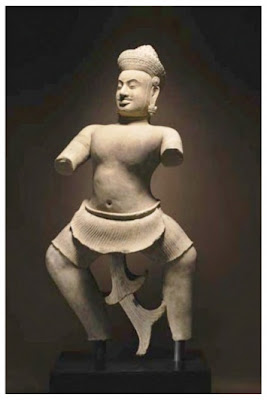 The 1,000-year-old temple guardian was meant to “convey power over malicious demons, thereby offering comfort for devotees,” according to Sotheby’s sales blurb.

But it’s certainly not bringing any comfort to the world-famous auctioneers following allegations it put the statue up for sale despite knowing it had been stolen from a temple in the ancient Khmer capital of Koh Ker, some 120km north-east of Angkor Wat.

Yesterday, US federal agents announced they would seize the disputed artifact from Sotheby’s in New York and try to return it to its rightful home in Cambodia.

In their civil action, prosecutors say the sandstone sculpture, known as the Duryodhana, and valued at up to $3m, was looted “during periods of extreme unrest” in Cambodia in the 1960s or 1970s. They claim it was then illegally imported into Europe and then the US.

:: Down And Out In Padstow And London is available as a paperback and eBook on Amazon CLICK HERE
at 10:12 am

Email ThisBlogThis!Share to TwitterShare to FacebookShare to Pinterest
This blog was brought to you by the words... auction, Cambodia, Duryodhana, Khmer art, Koh Ker, Sotheby's, stolen statue