Too Old To Be A Chef? 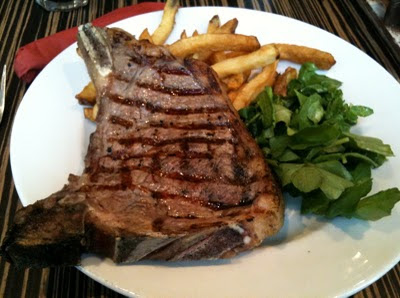 I’ve been thinking a lot about cheffing recently, and whether my idea to get back into it is part of some sort of acute mental breakdown or, far worse, mid-life crisis.

I gave up my reporting job nearly two months ago now, and I’ve got a couple of restaurant trials lined up (more on that next time) but I still haven’t really got my hands dirty. And at my age, I shouldn’t be wasting any time at all. There is so much to learn...

But perhaps it is my age? Maybe I’m scared that I no longer have the energy to cope with what is undoubtedly a young man’s game? In a recent so-you-want-to-be-a-chef-style article, Anthony Bourdain wrote that anyone entering the trade in their early 30s was already too old.

I’m already eight years past that, but I suppose it really depends on what level of cooking you’re talking about. Eighteen hour days in Michelin restaurants are obviously out. But I’m not really interested in awards. And as an old chef friend from The Gull once said to me, “the catering business caters for everyone”.

By that he meant you could still indulge your passion for food by doing anything from running a simple sandwich shop or deli or pie and mash cafe to serving up trout candy floss for wacky celebrity-based cookery programmes (Heston please don’t disappear up your arse completely).

It doesn’t have to be the long hours and stress of a restaurant, there are lots of ways of doing it. Some even have better hours than “normal” jobs.

And just because you’re running a gourmet burger van (as I've been thinking of doing) and not a high-end restaurant doesn’t mean you’ll enjoy it less, or be less creative, or take less pride in your food. As my stint at the Fat Duck proved, Michelin star restaurants can be very tedious, dull places to work in just banging out the same identical dishes night after night, all for the C-word that is consistency.

You can have far more fun in a bistro thinking of ways to use up scraps – and that to me is the truest and most worthwhile form of cooking: making ordinary ingredients taste great. Surely that’s why soup was invented? And soup, after all, is the best meal in the world.

I've been wondering about which path I should take, and whether the restaurant route is really for me. Then I started thinking about some of the passionate foodies I’d met on Twitter who’d also given it all up in their 30s or 40s to follow their cooking dream, and the different paths they’d taken.

There was Matt Follas (@matkiwi), the Masterchef winner who’d given up a lucrative IT job to open his own restaurant, The Wild Garlic in Beaminster, Dorset. He loves his job, and even though he has trained up chefs to cook for him, the long hours must take their toll.

There was @MsMarmitelover, who realised she was happiest cooking and opened a successful pop-up, the Underground Restaurant, in her London flat. Nice compromise because you don't have to be open every night.

There was Dave Ahern (@CorkGourmetGuy), an Irishman who decided to retrain as a chef after years of writing about food.

There was Tim Kinnaird (@DrTimKinnaird), who for some reason had ditched his job as a paediatrician to run a cake stall in Norwich.

And there were, of course, hundreds of food writers and produce makers determined to make a living out of their passion.

Indeed, friends have been asking me why I don’t just combine the cooking and journalism. But that seems like cheating somehow. I don’t want to just write about food, I want to cook it – and besides, how much is there to say about it? It’s only food after all. The art, surely, is in the doing?

But to plagiarise Beckett, I'll find a way...

You must go on.

Email ThisBlogThis!Share to TwitterShare to FacebookShare to Pinterest
This blog was brought to you by the words... cheffing, Heston Blumenthal, Matt Follas, Michelin, Tim Kinnaird, Underground Restaurant

Lenny, I think in a large way I have been very fortunate in where I started working. Yes the hours are long and the pressure is very high but the crew there are excellent.

That said I have questioned if I am right to take this on when I am going to be 35 this week. I dont think its a mid life crisis in my case though as I have never really grown up enough to have a mid life crisis.

What I can say is that if you are anything like me, and I get the impression you are, then you really wont be happy doing anything else, the trick is to find what are of the business you want to work in.

Chin up and remember the saying, you need an old dog for the hard road.

You most certainly are in your prime, and you know who you are and that will be reflected in your art, your food. Doing what you love is priceless, ageless.

Thanks for that. It means a lot. I've read a lot of your blog and really like it, and I think we are alike.

It hit me what you said about not being happy doing anything else. You're right. That's what I was trying to say (albeit badly) about not being content just doing food writing, and I know you spent a decade doing that before you took up the knives and trained as a chef.

I love the expression "you need an old dog for the hard road". I'll remember that.

I'm glad you've found somewhere good to cook. The people really make or break a kitchen in my opinion, and you sound like you've found a great bunch.

Thanks for the support. That's very touching. I think you're right - art is ageless isn't it!

Guys, I spent 9 long years cheffing in an amazing restaurant. The only things that you need are stamina, passion and dedication. Thats it. If you dont care, if its only a short term position, if your hearts not in it, if you cant do the long hours, if you are afraid of burning, cutting, or just working hard then stop now before you commit. But if your up for it then fuck it, its an incredible job with great rewards.
Jonathan.

I'm 50 in 2 weeks' time. Last year in a fit of madness (??) I went to Chef School and now I’ve been working at one of NZ’s top restaurants for the last 2 months.

I have to tell you it’s the hardest thing I’ve EVER done in my life, by a long shot (and I’ve done some mad things). Long hours, hot, heavy, stressful, poorly paid. But of course it will get easier!

There's been many times when I've thought "I can't do this, it's just impossible", and a couple of times where I nearly threw the towel in. But when I woke up the next day all I could think was "thank God I didn't". Because what would be the point? I'd just have to do it again, it would be unfinished business. If it's something that's nagging at you that you have to do, then you just have to do it!

One of the sayings in our kitchen is “take a tough pill”, well I reckon I’ve damn near overdosed. There’s no option for me but to do what I’m doing, there’s no other way to learn what I want to know, so I just have to get through the tough bits! Maybe you’re the same, you just have to do it? I think you’ll be surprised what strengths you can dredge up if you have to . . .

And think of the added "street cred" you'll have as a food writer if you've actually worked in the industry :-)

Dear Lennie,
it depends what you want to do.From past experience I can tell you that working an 18 hr day for someone else is completely different from doing it for yourself.Both Chef and I had high profile jobs him kitchen and myself FOH and both gave them up for the venture into self employment
approx ten years ago. We both still work 18 hr days and don't regret it though don't chase awards and out of kitchen status,but both still love cooking.Maybe you could do the same,a personally run place with decent food and reasonable prices and a chef who still cares in the kitchen? On the other hand if what you want is sleb status and a tv deal maybe it's not the biz for you ?

How very dare you! I'm in my twenties you swine!

You're being a bit disingenuous about Tim Kinnaird, aren't you?

He was after all a MasterChef finalist last year, and now has an on and offline cake business (soon to be a patisserie) rather than just a "cake stall".

I've been doing the michelin star thing for two years now and it's tough but manageable. To be honest I handled it far better than some of the young kids that came to work at these places. I think age aside you can either do these hours or you cant.

I now do nearer 60 hours per week rather than 80 but I'm a senior chef and get paid by the hour. Plus I'm working where I want to work right now, not because of the money or the position.

Age has had its crutches as well as it's advantages. I tend to get more shit for things I do wrong because people expect more of me, but at the same time I was only a commis chef for 3 months and I moved up faster than most.

I stared when I was 32 and so far I haven't regretted any of it. Apart from maybe working at Chez Bruce.